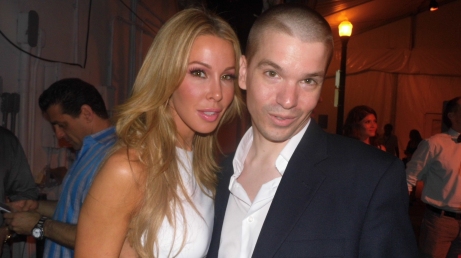 Over the last year we have kept you up to date on our meet ups with the beautiful and charming Lisa Hochstein of The Real Housewives of Miami. Every time we see her, we enjoy her positive and fun personality. She is a sweetheart. Today is also her birthday. Happy Birthday Lisa!

Last October we visited her at her home for her in-depth CYInterview [see here]. During the interview, Lisa showed off the beautiful gown she would go on to wear at the Miami Make-A-Wish Ball.

In April we ran into the lovely Lisa twice. First, we saw her at the grand opening of the Miami Heels store [see here]. A week later, we caught up with her and her husband, well known plastic surgeon, Dr. Leonard Hochstein, during CYInterviews on the red carpet at Roy and Lea Black’s amazing yearly Miami based event, The Blacks’ Annual Gala [see here].

This past May we saw the former Playboy model at Roy and Lea Black’s home in Coral Gables [see here]. Lea, as most of you know, is on The Real Housewives of Miami as well. See some of Lea’s past CYInterview moments here and here. That night, we had a candid discussion with country music star John Rich [see here].

This past Friday, we saw the lovely Lisa at the designer Beach Bunny’s fashion show during Mercedes-Benz Fashion Week Swim at The Raleigh Hotel on South Beach. You can see our photo above.

Lisa will be back on Bravo TV with her Real Housewives costars on August 12th. We are looking forward to it. Below, you can see some of our favorite photos with Lisa Hochstein from over the last year.

One Reply to “CYInterview Catches Up with One of Our Faves, Lisa Hochstein of The Real Housewives of Miami, at Miami Swim Week’s Beach Bunny Show”