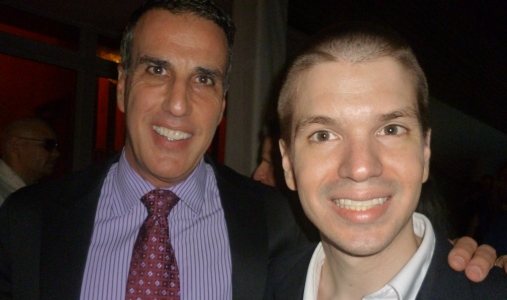 While attending music producer Rico Love’s 30th birthday party recently, at the SLS Hotel on South Beach, we ran into Judge Alex Ferrer. CYInterview followers will recall, last year we had an in depth conversation with the judge [see here]. His daytime court TV show, Judge Alex, is in its eighth season of syndication. The gavel wielder spoke with us for a few minutes during the evening’s festivities. You can read the highlights or listen to the entire CYInterview below:

When it comes to trial participants in his courtroom, Alex says sometimes it is about more than money:

“Almost anybody can avoid court, but it’s just a question of whether you’re willing to walk away from something that you feel you’re entitled to. A lot of people have a real desire to see justice done. I’ve had people sue when it cost them more money to sue than they were gonna recover in the lawsuit just because of the principle they really wanted somebody to tell the other person that they were flat out wrong. At the end of the day, most of the time lawsuits are about a lot more than just the money. They’re about a lot of personal feelings and things that have happened in the past and I think that’s what makes our show so popular is people can relate. People at home see the people telling their story and they can relate to it and it’s a good vindication to see justice done.”

During the Casey Anthony trial in 2011, Judge Alex was one of the on the scene commentators, providing analysis, to media outlets. The judge reflects back on the murder trial:

“I thought it was one of the most amazing cases I’ve ever seen. I thought it was more fascinating than the OJ Simpson trial which captivated the country. I think that she is clearly, was clearly guilty. I think that she murdered her daughter. That’s my opinion. They jury didn’t find it proven to them beyond every reasonable doubt. So that’s the way the legal system works. But people who think the legal system failed, they’re wrong. The legal system does not, our justice system does not guarantee a result. It guarantees a process that a prosecutor, a defense attorney will get to pick a jury from a panel and show the evidence to that jury and they decide. That happened. It didn’t reach the verdict most of America would’ve reached, but the system still worked.”

As we spoke about in 2011, Alex says he still wants to do Dancing with the Stars:

“Yeah. If they call me I’ll do it. Absolutely. I don’t know how good I’ll be at it, but I’ll certainly have fun trying.”

Judge Alex’s show airs nationally. You can find out when it airs in your market and learn more about the judge at http://www.judgealex.com.