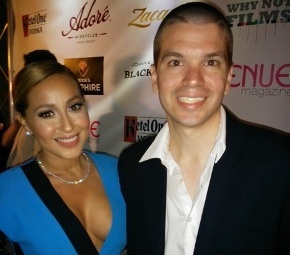 This past weekend, Venue Magazine hosted a cover party for its March/April issue at Adore Nightclub on South Beach. The publication is run by editor Alexia Echevarria of The Real Housewives of Miami fame. See Ms. Echevarria’s past appearances on CYInterview [here] and [here].

The cover girl for the March/April edition of the magazine is actress, singer, songwriter and television personality Adrienne Bailon. Many will recall her as a Cheetah Girl in the Disney movie trilogy which kicked off with the film The Cheetah Girls in 2003. The movie was about a female music group. She was also the lead singer of the music group 3LW. At the end of 2013, audiences saw her with rapper Ja Rule in the movie I’m in Love with a Church Girl. This fall viewers will see Ms. Bailon when she co-hosts the syndicated daytime talk show The Real.

We had a chance to CYInterview Adrienne on the red carpet for the party at Adore. You can read the highlights and listen below:

Speaking about being the cover girl for Venue Magazine, Adrienne told us this:

“I’m excited to be here. This is huge, one of my first ever magazine covers. I’m really excited about it. And I mean just obviously being here in Miami is always a wonderful thing. Any excuse to come to Miami is phenomenal, but walking into my hotel room and actually seeing the magazines on the tables was phenomenal. I’m excited to be a part of such an uplifting, thankful Latinos, a magazine like Venue Magazine that caters to my people and I love that and I’m excited to hopefully do more with them.”

The multi-talented Ms. Bailon has Puerto Rican and Ecuadorian roots. Her career has not come without its ups and downs. Over the years, Adrienne has been an ongoing point of focus for the blog and gossip world. Speaking about that, she told us this:

“I’ve learned to stay true to yourself and that not to worry about what anybody else thinks about you, to worry about the people that truly know and care about you. That’s what’s most important.”

As an artist, the Latina is most known for her role as a Cheetah Girl in the three movies the Disney Channel broadcasted about a girl group. Speaking about what it was like to be a Disney star, she told us this:

“I had an amazing time. It’s probably one of the most things that I’m most proud of was being a Cheetah Girl. I think we had an incredibly positive message and I loved that I was able to empower young women to believe in themselves and to follow their dreams.”

You can find more information about Venue Magazine at their official website here.