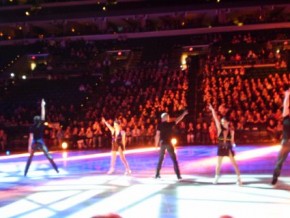 25 years ago, 1984 US figure skating Olympic gold medalist Scott Hamilton (Hamilton’s CYInterview here) formed Stars on Ice. He did this when another skating tour decided to get rid of its male skaters. Now, celebrating two and a half decades with some of the biggest names in the figure skating world, the show continues to have a solid following.

In attendance at the Smuckers Stars on Ice show in Fort Lauderdale, Florida on March 18th, CYInterview watched two and a half hours of entertaining figure skating performances that received big applause. The show is certainly a big family entertainment draw.

While other musical and entertainment acts at times included risqué behavior, Hamilton’s Stars on Ice represents a segment of the entertainment industry that strives to reach all demographics. It’s a show that all generations of women and men – ranging from five to 95 – can attend together.

The show offers performances from some of the world’s best skaters including 2010 Olympic gold medalist Evan Lysacek and 2006 Olympic silver medalist Sasha Cohen – who CYInterview spoke with a few years ago (click link here) There are also performances from veteran figure skaters Kurt Browning and Todd Eldredge, among others. After all these years, they still have the figure skating chops to entertain the crowds.

Before the show began Friday evening, Scott Hamilton thanked everyone in attendance for coming to Stars on Ice, considering the tough economic times. It might seem there are less options for family entertainment in 2011, but Stars on Ice works to fill that void. Combining athleticism and music with two and a half hours of nonstop figure skating action reminds everyone of what family entertainment is all about.

You can find out more about Stars on Ice tour dates and other information at http://www.starsonice.com/