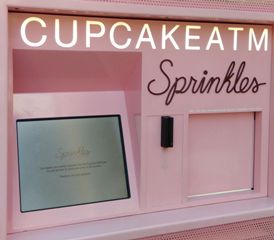 In downtown Las Vegas, on Fremont Street, you can buy gold and gold coins out of an ATM machine at the Golden Nugget Hotel & Casino. But for edible gold, you can actually get cupcakes out of an ATM on the Las Vegas Strip. Where, precisely, can you get this edible delight you ask?

The cupcake ATM [see picture above] is located at the cupcake shop, Sprinkles at the Linq Promenade. Sprinkles has additional cupcake ATMs in other states including Florida, New York and California. But if you want a tasty dessert from an ATM in the Entertainment Capital of the World, the Sprinkles Cupcake machine is the place to make your purchase while in Las Vegas.

The Linq Promenade is located next to the Linq Hotel & Casino. From the promenade, you can see the famous High Roller ride that gives an amazing view of the Las Vegas Strip. Enjoy!