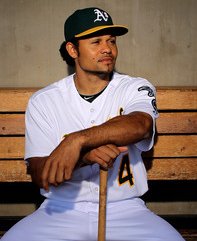 With football season winding down, MLB Spring Training is just around the corner. Playing on four teams in nine years – through an injury prone career – Oakland Athletics outfielder Coco Crisp is getting ready for a season he hopes is a healthy one. The player with probably the most memorable name in baseball explains that he got his breakfast cereal name in his childhood. Word got around in the minor leagues, before he debuted with the Cleveland Indians, and the rest is history.

“I think the main thing for anybody is staying healthy and just staying on the field. In that sense, trying to prove something, in staying healthy, I think I do…As everyone as kids, they joke around as siblings…It just kind of came around because my great grandmother use to call me Co for short and then they brought the cereal into the house Cocoa Krispies …I filled out a questionnaire [In Double AA Baseball] that said, ‘What’s your favorite pizza? What’s your favorite movie? Nickname?’ I put down Coco Crisp because that was the only thing I kind of had… Put it up on the scoreboard. At the time I was only hitting like 250 in Double A. Next thing you know, soon as the name goes up on the screen, a month later I’m hitting like 300 and they’re about to take it down. Like, leave it up there, don’t mess nothing up, I’m hitting well, let’s just stick with it. I get traded, called up to the big leagues a week after I get traded and about a month of my life, baseball-wise, I’m Coco Crisp, like a month and a half just joking around. Then now I’m in the big leagues and everyone knows me as Coco Crisp.”

Crisp has been on four teams in nine seasons. He says he is appreciative for the opportunities to play on four American League teams. If he’d never have been traded to Boston, Crisp would not have been on the 2007 Red Sox, World Series team. Being a huge Oakland Raiders fan led Coco to signing with the Oakland Athletics, where he currently is.

“It’s been a privilege so far playing with these different teams…If I would’ve been with Cleveland this whole time, never know what would’ve happened, if I would’ve won a World Series with being able to be traded over to Boston, I did win a World Series…I’m a huge Raiders fan, so it was my choice on going to Oakland. So far I’ve been lucky on the places that I’ve played. They’ve been places that have been something special about them and you know, there’s no complaints.”

The Athletics finished second in the American League West last season. The baseball veteran notes that many key injuries plagued the Athletics last year and was one reason they missed the playoffs. He gives us a preview of the upcoming season for the A’s and what needs to be done to get this team into the postseason.

“What we are addressing is power. Our pitching staff is phenomenal. They’re young. They have youthful arms…The thing that we were lacking I believe was that power, that power presence, that threat to where somebody could win a game at any time with just one swing of the bat, where last year we didn’t have that threat. So they weren’t really scared. I think we’re trying to address that with [Hideki] Matsui and other pickups, get those 20 plus homerun guys in there that at least give that threat that we can bang with some teams as well…I think we have a really good team and a chance to surprise some people. I don’t even know if it’s going to be that because of our pitching staff and how well we did last year. I think that was kind of a surprise that put us on the map.”

The current economic times in the United States of America have impacted numerous professional sports. Crisp believes it hasn’t had a huge impact on baseball fan-wise, but does believe the players have been somewhat affected. On the ongoing news stories regarding cheating in baseball, Coco believes a few players coming out here and there won’t have more of a negative impact on the game than has already taken place.

“I don’t think it affected it that much from a fan friendly standpoint…I think it affected the players a little bit, but not too bad. You still have your guys making these huge contracts out there, record-breaking type of contracts…Staying strict with the testing. If need be, put new rules in place to show the fans that – everybody is honest in the game now, although, people do what they do. You’re not gonna stop in this if somebody gets the urge to do something. For the most part, it’s showing the majority of the players in the game are honestly putting up the numbers that they’re dealing with, with hard work, hard training and the fans just have to buy back into the game…New people coming out here and there is not really effecting baseball anymore.”

Recently, Mr. Crisp was looking for a female personal assistant on Craigslist. However, nobody warned him that the online classified was taboo. After posting the ad, Crisp says the link read, “Coco Crisp looking for female.” You would then click on the link and it would say female personal assistant. After the entire experience, he ended up hiring his male cousin. He gives a full account of the event.

“I was on Craigslist List looking for a personal assistant alright? Just to make my days a little easier. My days aren’t super-hectic. It’s not that I couldn’t do some of this stuff myself, but it just makes your life easier. I actually found one. So I know this for a fact. It does make my life easier, but I didn’t know that Craigslist was taboo. Like you’re not supposed to post something on Craigslist. Nobody told me. So I wrote it myself. I took my time. Looked at other people’s stuff. It was like ok. This is what’s you say, this is what I want. This is what I would like. I would prefer a female over a male – anyway I end up hiring a male, my cousin to do the job anyway. My reasoning behind putting in parentheses female, was because I have a daughter and also more comfortable with my daughter being around a woman than someone I didn’t know that well in it being a man.

So that kind of got taken out of context because I’m not gonna describe the reasoning behind it or I probably should’ve, but I didn’t. I didn’t think to proofread it as far as how they could misconstrued this and make it funny or you know, clown me or however you want to say it. So when that started coming out, I was like, oh, you gotta be kidding me? This is the most ridiculous thing and it was funny though because you go online and it would say, ‘Coco Crisp looking for female…’ Then that’s just in parentheses and then you go click on it and says personal assistant afterwards and it’s just like, how could you just cut it off right there? So that got taken kind of a little bit out of proportion.”

Finally, as a big boxing fan, Coco says he has a secret he can’t share with the world yet concerning a potential knuckler between Floyd Mayweather and Manny Pacquiao. He believes it’s going to happen and thinks Mayweather will win.

“You know, I got some inside scoop, but I don’t know if I wanna give it to the world quite yet. But my thinking is that it’s gonna happen and I’m a huge fan of both, but I would give the nod to Mayweather.”

Listen to the entire CYInterview with Coco Crisp: