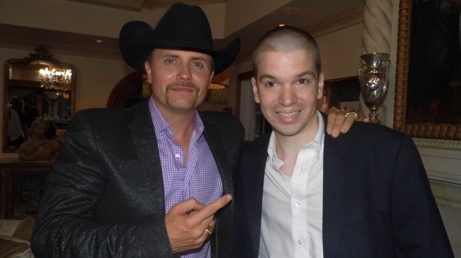 John Rich is one of country music’s success stories. He has succeeded as a solo artist and as half of the music group Big and Rich. As a songwriter he has penned a reported 13 top ten hits for artists including Taylor Swift and Faith Hill. Beyond country music, he is known as one of the winners of Donald Trump’s NBC reality show, Celebrity Apprentice.

John tells a modern day tale of rags to riches, going from a trailer park to stardom and having 46 employees. In speaking with him, it became readily apparent that he is a man who pulls no punches, whether talking anything from country music to politics.

Last month, we brought you photos from Lea Black’s cocktail party, at her beautiful home in Coral Gables [see here]. Lea is returning to the Real Housewives of Miami. The show is scheduled to return August 12. She is, for those of you who do not already know, married to Miami super attorney Roy Black.

It was at the cocktail party that I met John Rich. He and I strolled out to the Black’s spacious backyard. John lit up his pipe and we began speaking about his life. You can read the highlights and listen to the entire CYInterview below:

For those who remember John Rich as the winner of the TV show Celebrity Apprentice, he shared this about the experience:

“Boy that’s a tricky show. And I think anybody that’s ever watched it would say, ‘Man, that’s probably a tough thing to get through.’ But actually I got through it. I was working for St. Jude Children’s Hospital and actually won and raised over a million bucks for that hospital. So it’s a pretty big deal. … I think people look at me, hopefully, a little bit differently, little more wide spectrum than just a country singer. I am a country singer and a country songwriter, but I think on that show, Celebrity Apprentice, they saw maybe others things I bring to the table.”

Reflecting on the state of the country music scene, he says it has never been better:

“The state of the country music scene is it’s never been better. I mean you have all these artists breaking out. I can tell you from a touring standpoint, Blake Shelton and Eric Church and Taylor Swift and on and on and on. These guys are huge. Can I tell you a little factoid that you may not know? The number one radio station in Boston, Massachusetts is WKLB, the country station in Boston son, in Boston.”

The singer/songwriter has never been afraid to share his opinions about his music. On whether or not that is one of the keys to his success, John told us this:

“Country music is candid. I mean if you look back to the people that we stand on their shoulders, the Johnny Cashs, Whalen Jenningss, Willie Nelsons, George Jones, all those guys, you listen to what they were singing about and no their style of country doesn’t necessarily work with what’s at country radio right now, but the idea’s of that do and the life lessons and what you’re really talking about penetrates people when they hear that lyric they say, ‘I don’t know who that is singing it, but boy howdy that thing that just hit me right in the heart.’ That’s what country music is all about. That’s what I strive to be. I think that’s why our genre is the biggest out there.”

Back in 2009 John Rich penned the song Shutting Down Detroit, to give voice to millions of hardworking Americans. When it comes to politics, it is clear that John is a thinker and has a lot to say. In simple terms, he sums up what millions of dissatisfied Americans feel about their government:

“Well, I think our government is not to be trusted and I think that goes for Democrats and Republicans. Personally, I can’t stand a lot of them. There’s a few good ones here and there, but as a whole, just one guy talking, I don’t trust them and I think I probably speak for the majority of folks, we don’t trust them and you see what’s coming down out there and you work really hard. Hell I grew up in a trailer park for God sake and now I’m up here in Miami you know hanging around a television show and having a good time and making a great living. I think that folks in this country don’t trust the government anymore, both parties and I’m kinda tired of it.”

When it comes to the topic of the American dream, the country star explains why he believes that concept has become misguided and how the original principles guiding it have been lost:

“I think my life is the American dream. I’ll tell you one thing about America, they never promised us anywhere in the Constitution or the Declaration of Independence, they never promised us happiness. They only promised us the pursuit of happiness and in my opinion, we go pursue it. We have no right to happiness in this country and I think that is the problem. People think, ‘Well hell, I’m going without something. I should have that. They should give me that.’ No they should not. No they should not. Work, move, think, move yourself up the ladder; you’re listening to a guy who lived in a trailer park in Amarillo, Texas and at 39 years old has 46 employees and moving upward from there. To me, that’s the America dream. The American dream is not the guarantee of happiness. The American dream is the pursuit of it.”

There are many music acts going on tour this summer including Big and Rich. John talks about what he and his partner Big Kenny are up to:

“Well, Big Kenny’s the maniac. Think we all know that. But the fans said, ‘Thank Big and Rich. I think they’re over.’ I said, ‘Hell, we’re not over son. Just watch what’s gonna happen here in about a year or so. What we did is we made songs and took some time off and come back, wheels blazing. We got this song out called That’s Why I Pray which is actually nominated for a Grammy and CMAS, ACMS, CMTS, all the places that it could be nominated, it’s nominated for that. We just want to make great music and we love playing for the fans.”

Sitting outside in the not too humid Miami evening, John shared interesting perspective of what a country music star thinks about the city:

“It’s such a melting pot, you know, you look at, one of my favorite singers of all time is Raul Malo and you look at the mavericks, you look at some of these guys that have come down to Nashville and put their sting on country music and you realize how great the town is. Matter of fact, I got to work on a TV show with Gloria Estefan for six months and got to know her very, very well and it’s just a beautiful community. I mean, it truly is, I mean, the music, the culture, what that means to America, it’s infallible. I mean it is what we’re about. It’s about a new spice and a new taste. That’s what South Florida is to me. That’s what Miami is to me and it’s always a pleasure to come down here and visit.”

Our conversation with John touched upon his thoughts on the state of America and what, he believes, the dream truly is. Yet, though he is candid about his political views, do not expect him to run for politics in the future:

“I’ve had a lot of people ask me to run for office. You’d be surprised. I’ve had people ask me to run for Senate, United States Senate and Congress, you know the House [of Representatives], places of importance like that. And I said, ‘You know what?’ It’s not my time to do something like that.’ I write country songs and I live my life and I think my life is the American dream. … Politics to me is something that, it’s like walking barefoot through a rattlesnake nest. I just don’t care to get bit you know.”

One Reply to “Country Music Star John Rich: The Successful Singer/Songwriter, Winner of the Celebrity Apprentice and Half of Big and Rich, Sits Down for a Candid, Compelling and Varied Conversation”