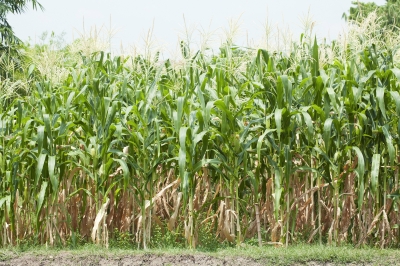 Corn. Golden and yellow, it knows what you think. It does. Prove that it does not. Can you? Corn. Ah niblets and their knowledge. The ear of corn, a repository of multiple little yellow brains. They think; they observe; they philosophize. Their contribution to knowledge is unparalleled. Prove it is not so!

Corn understands. It understands you. It understands life. It sees within and without. Corn, splendid thinking corn! Its wisdom as golden as its color. Its insights as firm and plump as its kernels. Corn rules! Can you provide conclusive evidence to the contrary?

Ah, corn, a magnificent fruit. You say it is a vegetable? No I say. I say it is a fruit. We have had it wrong all these years. Corn is the true fruit of wisdom. It is no mere vegetable. Indeed, corn is whatever we say it is, if enough of us say it loudly enough. Isn’t that how things work today?

Corn enjoys driving sports cars in the middle of the night. Corn is the original rocker. Corn has swum (swum is an odd word) the English Channel on multiple occasions. Corn knows what is in your heart. Corn was the first supermodel. Corn likes to dance the tango. One time, corn went on a photo safari and took pictures of Martians line dancing. It is true. Prove it is not. Prove it and I will say you haven’t proved it. Because what is proof but what corn tells us it is?

Corn understands and it has a good time. Corn started poetry ‘cause it likes a good rhyme. Corn is splendid; corn is good; corn is the origin of the word “should.” Corn strolls in mystery and gives us hope. If we second guess corn, we are merely dopes.