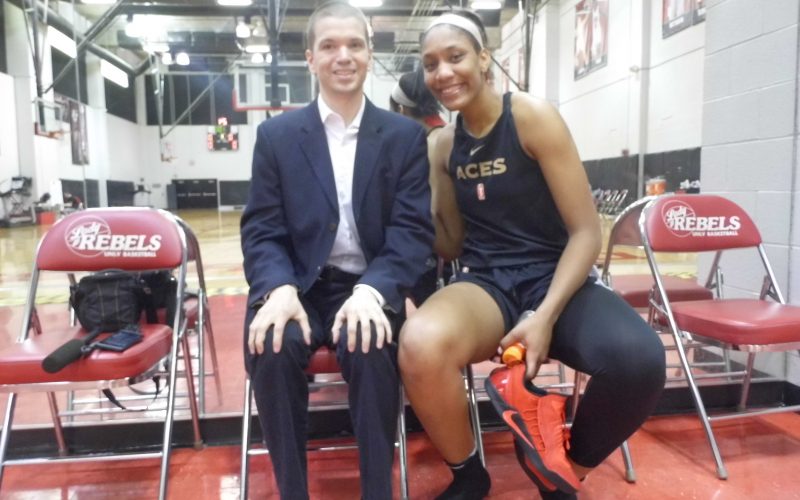 Receiving the number one pick in this year’s WNBA Draft, the Aces were able to select center A’ja Wilson, out of the University of South Carolina. A John Wooden Award winner, 2016 NCAA National Champion and All American, A-ja could very well be one of those once in a lifetime players for the sport of women’s basketball.

Her ability to bring a National Championship to South Carolina was something that brought her university great pride. She became a rock star on campus and the face of her school, in very much the same way Tim Tebow was the biggest thing at the University of Florida when he was the quarterback of the football team there.

Born and raised in South Carolina, A-ja is now living in Las Vegas. She can see the Vegas Strip from her home. As the inaugural WNBA season begins for the Las Vegas Aces, many fans will get to know this promising young athlete who achieved much on a collegiate level. Though the accolades are endless, A-ja Wilson is just excited to play the game of basketball.

For the city of Las Vegas, its residents and the tourists who come here, they will have a chance to see A-ja and the rest of her teammates at the Mandalay Bay Events Center. Time will tell if this team will be playoff/championship competitive in year one. But one thing is for sure, A-ja is the kind of player who can get you closer to that goal.

We spoke to A-ja recently at the team’s practice facility, where we discussed everything from being nervous before every game to Will Smith being the person she most wants to meet. See our picture above.

Even with all her accolades on the basketball court, A-ja Wilson admits that she still gets nervous before every game:

“Every time, every game, no matter who we’re playing against, no matter what the media or odds may have on the team that I’m on, I get super-duper nervous. I get the jitters. I get really, really nervous, but once I kind of get out there with my teammates and I feel the energy within us, it starts to go down.”

The social media world has already chattered about A-ja bringing the Aces a WNBA Championship. The center could have gone to any program in college. However, she took a chance and stayed home attending South Carolina where she brought the school its first national championship in 2016. She reflects back on the big risk she took that paid off:

“I took a huge chance at the age of 16. I mean, I really trusted Coach Staley and her program and what she stood for and I kind of went out with a leap and got really, really lucky and blessed to have the opportunity to bring something back to my home state that, you know, is never really on the map like that. So now, you know, South Carolina is a powerhouse of the SEC.”

Though her accomplishments are undeniable, she admits that she just loves playing basketball:

“My biggest thing, I don’t go out saying I want to win this and that, I just go out there and have fun. I’m blessed with a great group of teammates and a coaching staff. And I take that and I just play off that. I feed off that.”

On how her first WNBA regular season game will be different than her first game in college:

“I think it’s gonna be good, a good different. I’m glad that I have this opportunity to take my talents to the next level, but I know the nerves are still gonna be there and the excitement is still gonna be there, but I just really hope that everyone come out and supports us and watch us and love the game as much as we do.”

A’ja admits that she is a big fan of NBA superstar Blake Griffin of the Detroit Pistons. At the WNBA Draft, she was surprised with a congratulations message from him. She admits he would be her dream pickup game opponent:

A sports celebrity, perhaps one of the biggest currently in women’s sports, the center for the Aces says the person she most wants to meet is Will Smith, owing to the fact that she is a huge fan of his popular 90s TV show, The Fresh Prince of Bel Air:

“Will Smith is like my next person that I have to meet. Sometimes I want to say Beyonce, but like, right now, Will Smith is my number one person. He’s just a great feeling person. He’s humble and he’s, I just love him so much.”

Check out the official website for the Las Vegas Aces clicking here.

You can find A’ja Wilson on Twitter clicking here.