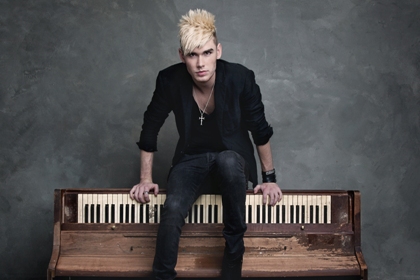 With American Idol season 11 as his springboard, Colton Dixon has topped various Billboard music charts and broken records with his debut album, A Messenger. Though some might have preconceived notions about Christian music, Colton’s album provides an inspiring blend of musical genres. It is a mainstream musical collection worth hearing.

Colton joined us to discuss his album, among other topics. You can read the highlights or listen to the entire CYInterview below:

“It was in my car for a solid month before it released and I don’t know, I expected people to of heard it already. So it’s nice that they are actually being able to hear it finally. … I owe a lot to American Idol for giving me a really cool and unique platform just to really connect with my fans in ways that other artists might not be able to, you know. So I think that is a huge part. You know, I think the people who liked what I did on American Idol were expecting a record and were excited for a record. So that’s what we were trying to do. We were trying to put out something as quick as we could and again, I just can’t believe all those numbers you just told me. It’s just really surreal.”

Though Christian music might not be thought of by the general public as being commercial, Colton’s debut album found a way to bring it into the mainstream by adding some pop and rock. It was something he was hoping to do in the future, but it came earlier than expected. His contributions to the project were numerous, as he wrote every song on the album but one.

“It wasn’t necessarily leaning one way or another. It was pretty obvious to us that Christian music was home, which I’m very happy about, but musically, I love rock music, I also love pop music … I just tried to combine those two worlds and I think that’s what we came up with, with this record. … I wasn’t necessarily trying to do one or the other with genres, but it’s cool that people outside the Christian music bubble are enjoying the record. I will say that. That’s definitely something I wanted to do. Maybe not now, but in the future is to reach a wider audience and it’s cool that this record’s already doing that.”

Being on American Idol gave him the chance to meet and be judged by Jennifer Lopez, Steven Tyler and Randy Jackson. Here he offers a couple of his anecdotes about the show:

“I’ll never forget the night that Jennifer Lopez called me beautiful. That was one to remember and I’ll never forget the night I did Broken Heart by White Lion and it seemed like Steven Tyler, I don’t know if he had something weird in his drink or what, but he was just not a happy camper that night. I know he hated what I sang and he really didn’t like a couple other ones that other people sang either. So those are just a couple of things that I remember about them. I will say, though, I love them both to death. They’re awesome people and Randy as well. I hate they’re not back this season, but yeah, those guys are gonna be missed in watching the show.”

Colton Dixon was called the Tim Tebow of American Idol. Though he has not had a chance to meet Tim yet, he does want to spend some time with the football star who he says inspired him:

“I have not, but that is one guy that I really would like to just shake his hand, coffee would be the most ideal or dinner, whatever, but just really respect the guy. He really is what inspired me just to be so bold about my faith. I love that he was so bold you know in a mainstream world in sports you know. It’s just really, really awesome to see someone standing for what they believe in no matter what it is, you know. So that definitely inspired me to do the same. But no, unfortunately I haven’t had a chance to meet Tim yet. Hopefully that’ll happen.”

In what he wants people to take away from his music, Colton hopes people feel encouraged:

“We’ve been through some dark times here in the U.S. and just with different shootings and man, the crazy, crazy weather that’s out of our control. It’s just we’ve seen some dark times you know. I just want to shine a light on that and to be a light in a dark world. No matter what you’re going through whether it’s a death in the family or a breakup or you struggle with suicidal tendencies even, just whatever you’re going through, I just want these songs to be an encouragement to you as they have been to me in just writing these songs and pulling these songs from experiences that I’ve had in my own life.”