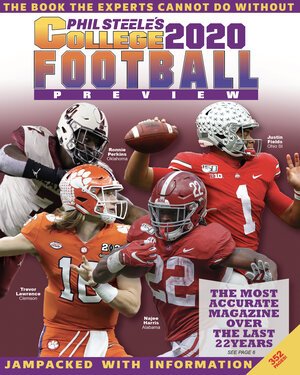 This is the first weekend of the college football season. Due to the coronavirus pandemic, over 50 schools are not playing football as of this moment. That could change over the coming month. The SEC, ACC, Big 12, American Athletic Conference and a few other conferences as well as teams not in a conference will attempt to play an entire college football season. The Big 10 and Pac 12 are among the more than 50 universities not participating in this season as of now.

However, many of the best teams in college football including Clemson, Alabama and Oklahoma will be playing this year. For our yearly college football preview, we welcome back sports magazine editor Phil Steele. Mr. Steele is the editor of the long running College Football Preview. You can find more information at www.philsteele.com.

Summing up what we can expect to see with over 70 of the 130 teams playing Division 1 football and if we will crown a national champion this year, Phil Steele said this:

If there is a College Football Playoff, he believes Clemson, Alabama, Oklahoma and Central Florida will be the four teams in the playoff. It would be a surprise to see Central Florida, of the American Athletic Conference, finally get a chance to play for a national title. That owing to the fact that they have been previously overlooked, even though they have recently had two undefeated regular seasons.

This is how the NCAA football expert believes the Central Florida Golden Knights can make the playoff:

“Last year I actually rated the American Athletic Conference the fifth best conference in college football ahead of the ACC, which tells you the respect level I have for the kind of football they’re playing in the American. Now if UCF was to run the table and win the American conference and you look at all the other conferences and they have teams, their second place teams with two or three losses, remember the second place teams, all gonna lose the conference championship game whoever that team is. So, if you have teams with two or three losses, UCF undefeated at the end of the year, I think UCF can sneak into the playoff.”

Various schools, so far, are reportedly allowing their stadium attendance to be no more than 20 to 25 percent. On if the lack of crowd noise will impact the games this year, he believes it will:

“The noise and emotion that comes with that homefield edge, I think a lot of it will go by the wayside. I think Chris, if you look back historically, this year we may see more road teams win than ever before because of the lack of crowd noise.”

Due to the coronavirus pandemic and numerous other social and economic factors, some college football players are opting out of playing this season. Mr. Steele thinks the defending national champion LSU Tigers will be impacted most by this:

“I would have to go with LSU is that team. And Coach Orgeron has said this may not be the end of it. Some other players are considering opting out. I think when you have an inexperienced team to begin with, at least they had some stars returning. Now most of the stars are not returning. I think LSU will be that team that has the biggest impact from the opt outs.”

If there is a postseason, do not expect a regular bowl season. This is what the college football expert thinks will happen:

You can listen to the entire CYInterview with Phil Steele below: