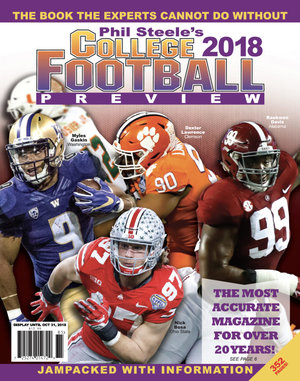 This past Saturday, the college football season kicked off. Starting Thursday evening August 30th there will be games every day through Monday September 3rd. Consequently, it is time for our yearly season preview with the editor of the longest running season preview magazine, Phil Steele. Phil is the Editor in Chief of Phil Steele’s 2018 College Football Preview.

Over the years, we have had the veteran editor on CYInterview to talk about everything college football. This year, Phil is taking Alabama to repeat as national champion with Clemson, Ohio State and Washington making the College Football Playoff.

You can listen to the entire CYInterview segment below and read the topics we spoke about.

Topics for this year’s college football preview with Phil Steele:

Analysis of Phil’s four picks for the College Football Playoff which are Alabama, Ohio State, Clemson and Washington

How Auburn vs. Washington and Michigan vs. Notre Dame in week 1 will impact the final College Football Playoff standings at the end of the year

Can Wisconsin get into the College Football Playoff?

After a 4-7 season last year, Phil tells us why the Florida Gators are his pick for most improved team

With the distractions going on at Ohio State, is this the year Michigan surpasses the Buckeyes and wins the Big 10?

Is this the year that the Texas Longhorns have a very successful season?

Discussion of the Heisman Trophy race

And finally, why Phil Steele believes Alabama will win the National Championship again