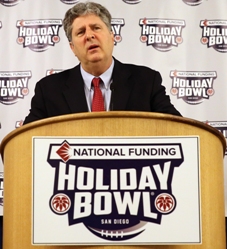 The college football bowl season is here. This coming Tuesday, Washington State head football coach, NY Times Bestselling Author and CYInterview regular Mike Leach’s team will take on the Minnesota Gophers, out of the Big Ten Conference, in the Holiday Bowl. The game will take place in San Diego, California at Qualcomm Stadium.

This will be the second time in his career that Mike will have a team playing in the Holiday Bowl. In 2004, while head coach at Texas Tech University, his team defeated the California Golden Bears 45-31. Being a veteran of the Holiday Bowl, Coach Leach tells us all about what people should know about the game, tells us why he wants his school’s in state rival Washington to win the College Football Playoff and reveals some of his upcoming New Year’s Resolutions.