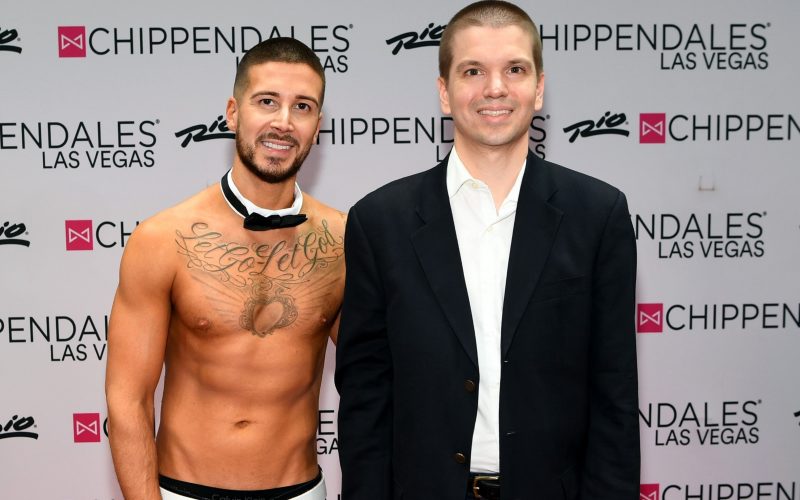 On Friday, Vinny Guadagnino of Jersey Shore fame made his return to Las Vegas. Starting his second run as the celebrity guest with the well-known male revue, Chippendales, he received many rounds of applause and an overall enthusiastic welcome from the audience.

We had a chance to CYInterview Vinny G., on opening night of his second run of shows. He will be appearing at the Rio All-Suites Hotel and Casino Friday through Sunday until September 1st. You can see our photo above.

Telling us about his experience with Chippendales, so far, he told us this:

“I was like always the quiet one on the Jersey Shore and didn’t expect me to be the one that’s like headlining Chippendales and I think that just makes it that much more awesome. So, I love that people got to see another side of my personality from doing this show.”

Speaking of one of one his Jersey Shore castmates, he teased that JWoww will give a reaction to his Chippendales role on an upcoming episode of Jersey Shore: Family Vacation on MTV:

“JWoww did see it and you might be able to watch her reaction on some kind of upcoming season of Jersey Shore. So, I’ll tease it with that.”

On something new people should know about him that they do not, he said this:

“I watch the show The Handmaid’s Tale.”

The Handmaid’s Tale is an original Hulu series.

You can find more information and purchase tickets to see Vinny G. in the Chippendales show at the Rio All-Suite Hotel & Casino clicking here.