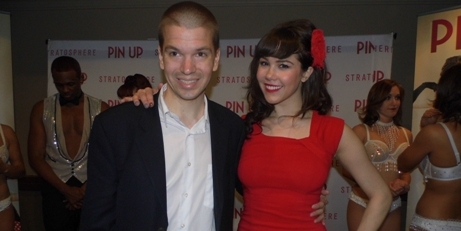 For more than two years, Claire Sinclair and her popular Pin Up Show have been one of the attractions on the Las Vegas Strip. You can see the 2011 Playboy Playmate of the Year perform in the lead role in Pin Up, at the Stratosphere Hotel and Casino. (See our photo with Ms. Sinclair above.) In 2014, the show was voted Best Showgirls by The Best of Las Vegas. If that were not enough, this year it was also given the honor of Best Adult Show.

With a set of drop dead gorgeous women, great dancing and music by a phenomenal band, Pin Up brings together provocative beauty with serious artistic performance. Ms. Sinclair, who hosts the show, provides her own entertainment through a set of diverse skits. A few times during the show, she even shows off her moves in nothing but tiny panties and pasties. Hubba, hubba!

Ms. Sinclair is a friend of fellow Playboy hottie Holly Madison, who for three years did the very popular Peepshow at the Planet Hollywood Resort and Casino. For more than two years, Claire who has been the Playboy personality showing crowds in Vegas that Playmates are more than just pretty faces (and bodies.)

We had a chance to speak with Claire in her dressing room, before a show, on May 25th. Coincidentally, it was her birthday. Happy Birthday to you, again, Claire! We appreciated being part of your special day.

You can read the highlights and listen to the entire CYInterview with Ms. Sinclair below:

On how Pin Up was awarded the title of Best Adult Show in Las Vegas this year, Ms. Sinclair shares with us the changes the show made to receive the honor:

“This year we got Best Adult Show; we’ve added a punch of pasties into the show, before we were more conservative. We were more of a conservative like 1950s legitimate type of experience where it wasn’t a lot of boobs. And over the course of the past couple years, we’ve definitely became more scantily clad and I think that put us in the running for adult show this year. And I’m really excited, that’s a really cool title because there’s a lot of adult shows in Vegas and it’s a cool one to win. I think we do it in a really, it’s not raunchy. It’s a really classy way of doing a topless show.”

Arriving at McCarran International Airport in Las Vegas, getting into a taxi or shuttle to leave the airport and making your way to the Las Vegas Strip, you see a variety of billboards. Two of them feature Claire Sinclair and promote the Pin Up show at the Stratosphere Hotel and Casino. On what it means to be on major billboards in Vegas, the 2011 Playboy Playmate of the Year said this:

“It’s really awesome. My friend Holly Madison use to be in Peepshow, which was a prominent show here on the [Las Vegas] Strip a couple years back and I remember seeing her billboards all over the place and always wanting to experience that and thinking how awesome would that be. She was on cabs; she was on billboards and it’s really surreal that it actually ended up happening and it’s a weird feeling. It’s almost like you’re disassociated from it. Like, I know it’s me, it’s just like a different version; it’s really cool. To me, it’s a mark of like this is awesome. It’s a sign that the show is successful and that we’re doing well and it’s a nice reminder. It makes me really happy, like I have a big grin on my face for like the next 15 minutes after I pass by it, any of the billboards or advertisements. It’s a very nice feeling.”

Her good friend and fellow Playboy veteran Holly Madison rose to fame in the popular E! TV show The Girls Next Door. The program showed off the Playboy Mansion and many of the company’s best personalities. The show made Holly a star, which led to her getting a variety of further professional opportunities including having a long run in the popular Peepshow at The Planet Hollywood Resort and Casino on the Las Vegas Strip. On what advice Holly gave her for Pin Up, Ms. Sinclair shared this:

“She continually says like make sure that you do things to freshmen it up so that it doesn’t become stale for you. She did a very similar thing in Peep Show, her position in the show was kind of the same thing that I do. She’s not a dancer, so she kind of like hosted it and was like in every act, but she didn’t do a lot of dancing and she did it for three years and I think she grew a little tired of doing the same old and then she wanted to sing in the show, so she added a number in the show where she actually sang and that kept it fresh for her. It was something new and exciting.

And she took singing lessons and I haven’t gotten to that point where I’ve ever felt bored because every time I feel like, ‘Oh my gosh, this is getting a little tedious’ If we do it for like six months, something new comes into the picture. So I’ve never been at that point where I’ve ever suggested something to spice it up and make it new for me. But she just wanted to make sure like, you know, mentally you’re enthusiastic about doing it every night and it’s a challenge every night.”

In a few weeks, Holly Madison is slated to release her tell all book titled Down The Rabbit Hole: Curious Adventures and Cautionary Tales of a Former Playboy Bunny. The book is reported to reveal the dark side of her past Playboy lifestyle. On whether Claire has had a chance to read her friend’s book yet, she offered this:

“I feel like I’ve known Holly about five years now and I feel like everything she discusses in that book I know a little bit about just from us talking and chit chatting. Like, I know what she covers in it. I think I’ll be surprised by a couple things that she’s opened up about because she’s a very private woman; she always has been, even with her friends about, you know, her personal relationships. She’s kind of tight lipped about it and this is a tell all. So I’m definitely going to pick up the book when it’s out and I hope she gives me one. But, no I haven’t read it first edition, like she hasn’t sent it out to her friends to read. I think we’re all gonna read it when it comes out. She hasn’t given us like a preview book or anything.”

Speaking of books, the star of the best burlesque show in Las Vegas confirms she is an avid book reader who, when back in Los Angeles, would go to the library and check out numerous books to read:

“It totally was back when I had a library card back in L.A. I have not gotten once since I’ve lived in Vegas. I go to Barnes & Noble and spend too much money and have a crap ton of books in my closet that I haven’t read. That’s what’s happened, is like, I have no time to read all the crap. I am trying to conquer a book now at least a week, like by reading in between acts in the show, but even like that’s a little tough. I use to read a lot more than I do unfortunately, but I am trying to finish everything that I have right now.”

As far as something we may be surprised to know about her, the Playboy Centerfold shared this:

“I think like I’m a bathaholic. This is weird. Like, my room is always freezing, it’s always like under 60 degrees. So when I go in the room, the first thing that I want to do is take a burning hot bath and I take it in the dark, kind of like I’m in the womb again. Like I have, turn off the lights, put a hot bath on and then like I’ll get out of the bath, I’ll keep the water in the bathtub and like I’ll go do something else and I’ll come back to the bath. I take like five baths a day. But I try not to waste water, so I’ll leave the bath as long as it stays warm, but that’s kind of odd I guess.”

Finally, on her thoughts on life today, Claire Sinclair said this:

“I enjoy living. I even enjoy the negatives honestly. I am not gonna answer like the what I don’t like about life because I enjoy those, even when I have a really shitty moment, like the worst thing that can happen and I am not enjoying myself at all, I just know that it’s gonna make whatever good moment that comes after that, that much better and intensified. So I’m never like, I’m never sour when something bad goes down.

I’m like, ok this is life. I’ve had some really crappy moments too and it’s just attributed to all the awesomeness of the good stuff. So I’m, I just like living. Hope that I don’t die tomorrow and this interview’s playing. The whole experience is good, regardless of where I’m at. … I won’t be surprised in five years no matter what facet I end up in. Nothing would really shock me. I’m just, there’s a lot of things that I’m interested in.”

You can find upcoming dates, purchase tickets and more information about the Pin Up show at the Stratosphere Hotel and Casino clicking here.