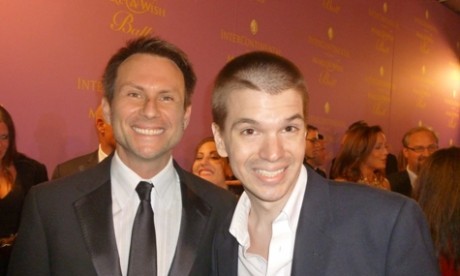 A couple of weeks ago, at the 18th Annual Intercontinental Miami Make-A-Wish Foundation Ball, I caught up with Christian Slater. The actor told me he will be appearing in an upcoming movie with Sylvester Stallone, titled Bullet to the Head. That movie, set for release this coming February, is already garnering positive reviews. My conversation with the actor, who has appeared in such movies as Robin Hood: Prince of Thieves and Heathers, was brief yet compelling.

You can read the highlights and listen to the entire CYInterview, with Christian Slater, below:

On what supporting the Make-A-Wish Foundation means him, Christian said this:

“Any opportunity to come and lend my support and be a part of it is, it’s definitely a worthy organization. I love it. … Every time I’ve done one of these Make-A-Wish events, it’s always been incredible. I mean, meeting these kids and seeing what they’re going through, it definitely opens my eyes to making dreams possible.”

When it comes to what he loves most about Miami, Mr. Slater says the climate is just right:

“I’m definitely a warm climate person. So I’m all about the warmth. It’s very nice. … Strangely enough L.A. is very cold. Yeah, it gets very cold. So Miami, really is just the right temp for me.”