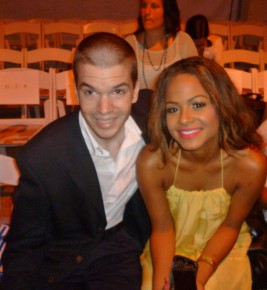 Thursday evening, I attended Lisa Burke’s runway show where she introduced her new swimwear for the Lisa Blue fashion line. Sizzling! The Australian model/designer sure knows how to put on a show and an after party. The events were held at The Raleigh Hotel in Miami Beach, a luxurious establishment featuring, among other things, excellent, outdoor dining.

In the coming days, we’ll bring you some stories and CYInterviews centered on the star-studded event, which kicked off Mercedes-Benz Fashion Week Swim in Miami.

For starters, there were numerous celebrities in attendance including the beautiful Christina Milian, pictured with me above. Many will recall Christina’s songs, including her hit Dip it Low, as well as her lead role in the 2003 movie Love Don’t Cost A Thing, among other projects. Earlier this year it was announced that Ms. Milian had joined record label Young Money and that she has new music coming out. She also has a new swimsuit line called Havana Nights.

Christina and I chatted, and we agreed that she would definitely have to be CYInterviewed in the future, to speak about everything she’s up to.