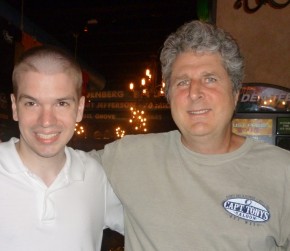 Media work, a 24/7 news cycle and vacation do not easily mix. When I take a break from CYInterview, be it for a few days or a few hours, I want to make sure my time is well spent. Typically, I don’t do an all play vakay. Even on vacation I look for stories that will interest the CYInterview community. Call it an occupational hazard.

Earlier this week I visited Key West, here in Florida – I’m Miami based for those of you who did not know. It’s an interesting place to spend some time. There are lots of great beach and water based activities, as well as various sites of historical interest, like Ernest Hemingway’s home for example. And, of course, there is thriving nightlife and who could forget to mention the Key Lime Pie.

During my visit I had the opportunity to spend over two hours speaking with Mike Leach, the current football coach at Washington State University. You might recall my 35 minute CYInterview [see here] with Coach Leach, the 2008 Big 12 College Football Coach of the Year, when he was promoting his book, Swing Your Sword, in 2011. Over the course of the last year, Mike and I kept in touch and we decided to meet up this past Monday evening, at a restaurant called The Rum Barrel [see here], located on Front Street in Key West.

Coach Leach has enjoyed Key West since he visited it to recruit a kicker when he was an assistant coach at Iowa Wesleyan. We discussed numerous sports topics, as well as social and political issues, among other things. Coach Leach is a down-to-earth guy who’s interested in many things and likes to talk about them in great detail. I cannot thank him enough for his interest in everything we are doing here on CYInterview. We discussed some of the past CYInterview participants and how things have come to fruition over a period of close to 12 years.

I had enjoyed Mike’s work for a long time, before we spoke last year and was always interested in his coaching and life philosophies. Once in a while, I get to CYInterview someone I’ve had a long term interest in and, on occasion, I am able to keep in touch with them and eventually meet them. With that, I would like to thank Coach Leach for his graciousness with his time. Meeting him proved to be an insightful and fun experience at the same time.

This upcoming college football season will be Coach Leach’s first at Washington State. His hopes are to get the Cougars to a bowl game. The team has not been to such a game in close to decade. I wished Mike the best on the upcoming season and told him I believe, with him at the helm, the Cougars will become bowl eligible.

You can find more information and purchase a copy of Mike Leach’s Swing Your Sword: Leading The Charge in Football and Life here.