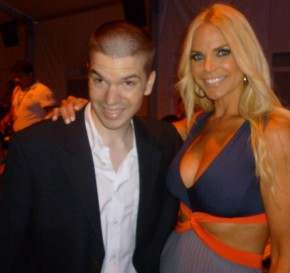 Over the last week and a half, I’ve shared with you who I visited with during the Lisa Blue fashion show on Miami Beach. There was my meet-up with singer Christina Milian [see here], as well as chef-to-the stars Travis London [see here] and my CYInterview with swimsuit designer Lisa Burke [here].

During the festivities, I also caught up with Alexia Echevarria of the Real Housewives of Miami. She’s the executive editor of Venue Magazine. Venue is a Spanish language publication covering a variety of subjects including fashion, entertainment, food, lifestyle and Miami’s social scene. You can find more information at www.venuemagazine.com.

Alexia told me The Real Housewives of Miami would be back on TV soon. Days after the Lisa Blue fashion show, what she told me was confirmed. It has been announced that the Miami based reality offering would return to Bravo September 13th.

Besides her work covering Latin culture, her biography on the Bravo website for The Real Housewives of Miami notes her photo shoots with Marc Anthony and luncheons with President Obama.

It was great meeting Alexia during Mercedes-Benz Fashion Week Swim. I’m sure many are looking forward to the new season of The Real Housewives of Miami.