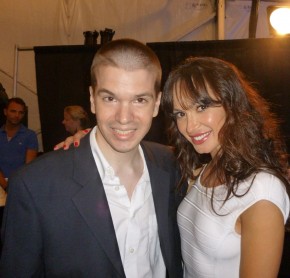 Over the last few weeks we have brought you some CYInterview stories about the Lisa Blue fashion show held during Mercedes-Benz Fashion Week Swim in Miami Beach. We’ve shared with you the people we’ve met, including singer Christina Milian [see here], chef Travis London [see here] and Alexia Echevarria of The Real Housewives of Miami [see here]. We also brought you a CYInterview with fashion designer Lisa Burke [see here].

This final piece from the Lisa Blue fashion show focuses on well known Dancing with the Stars professional dancer Karina Smirnoff. Karina walked the runway with the models and, fittingly, threw in a little dance for the crowd. After the event, I caught up with Ms. Smirnoff for a CYInterview. You can listen to the entire conversation or read the highlights below.

Listen to the Karina Smirnoff CYInterview:

As far as whether it’s harder to dance or model, the professional dancer who posed for Playboy last year says the following:

“It’s a hard question because on Dancing with the Stars it’s just not a dance. You know we gotta show celebrities what they have to do. We have to practice, we have to create, choreograph. It’s a long process. Modeling even though it’s not my forte, it’s not an easy job because I wasn’t sure whether I was supposed to be serious or whether I was supposed to smile when I’m walking down and they wanted me to do a little bit flamenco. So it was a lot of fun. I don’t know what’s easier or harder, but I think both activities are quite exciting.”

Back in 2009, I had a long CYInterview with Karina’s then celebrity dance partner, Apple Co-Founder Steve Wozniak [see here]. The Woz claimed the dancing experience changed his life and he had nothing but good things to say about Karina. She was his professional dance partner during season eight of Dancing with the Stars. Ms. Smirnoff says she still keeps in touch with the computer wizard:

“I do. I do. I still keep in touch with Steve and Janet his wife. What a cool guy. Such an amazing person, great family, but yes, it’s you know, it’s, we go from one season to another, we’re about to start season 15, 15, who would’ve thought. So you make a lot of friends throughout the past 14 seasons and Steve is definitely one of them.”