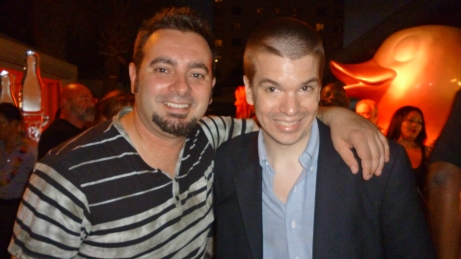 Earlier this month we shared with you our CYInterview with retired NFL running back Clinton Portis [see here] from Irie Weekend. During the weekend festivities we also spoke with musician Chris Kirkpatrick, known to many from the popular 90s/early 2000s boy band ‘N Sync. Post ‘N Sync, Mr. Kirkpatrick continues to work on his music and represents musical acts, among other things.

Chris told us about his upcoming wedding, charitable causes and spoke about the possibility of an ‘N Sync reunion. You can read the highlights and listen to the entire CYInterview below:

This year’s Irie Weekend was Chris’s eighth time participating in the festivities. All the events raise money to assist at risk youth. Speaking about his own charity, the musician told us this:

“I have the Chris Kirkpatrick Foundation. We work with underprivileged kinds in Central Florida area. We do a lot of stuff at Halloween, Christmas, a lot of the big holidays making sure the kids have costumes. We build them a giant haunted house, take them on hay rides and a lot of people forget about underprivileged kids on Halloween because that’s the day when you want to dress up and be different. But you know a lot of these kids want to be different too and it’s fun to see these kids because for a day they could be Buzz Lightyear or they could be Iron Man or whoever they wanna be and it’s almost like an escape for them.”

Chris got engaged this past October to Karly Skladany. He told us the wedding is in November:

“We got engaged. Sometime in November we’re gonna end up getting married. So she’s a great girl. We had fun in Italy and you know it just happened. It was like spontaneous.”

On if there will ever be an ‘N Sync reunion with former fellow bandmates Justin Timberlake, Lance Bass, Joey Fatone and JC Chasez, he told us this:

“Well, I mean you can’t rule it out you know, but I don’t think it would be happening any time soon. But you know those guys were all really good friends and I think it’s all a matter of timing when we’re all ready to go back into that and pick up that chapter again and it’ll happen. But until then, you know we’re all kind of doing our own thing and waiting for timing.”

You can find more about the Chris Kirkpatrick foundation here.

You can learn more about Irie Weekend here.