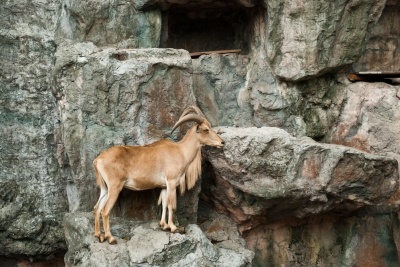 Chester was not your average goat. No. He was far more stubborn. In fact, he was said to be more stubborn than four donkeys and three mules. Now that is stubborn. Anyway, Chester lived in a mountainous area as goats often do. He enjoyed climbing up and down the mountains, getting exercise while developing different perspectives of what he saw below.

Depending on where he was in the mountains, the town in the valley below looked somewhat different. Chester took this as a metaphor for life itself. He believed that how we perceive reality is predicated on what our vantage point is. And as he often explained, that vantage point could be physical, yet it could be emotional as well – based on the unique experiences and interactions we have had in our lives.

Anyway, the weather was getting cold. It was December. The holidays were fast approaching. While many of the other goats began to do less climbing, owing to the cold, Chester persisted. However, the cold was taking its toll on him. Specifically, his head was getting quite cold as he climbed.

His fellow goats, seeing how cold he was, suggested he put on a goose down vest and a wool knit cap. Chester demurred. He did not think it was fair to the geese and the sheep. He had friends who were geese and sheep. He liked geese and sheep. Yet, he did feel it made sense to find some way to make himself warmer.

One day, while in town, Chester came upon a store selling hats. In the window was a sign that said, “Synthetic Beanies 50% off.” Now, like many, he found a good beanie to be quite stylish. Additionally, he was a frugal goat and enjoyed the idea of being able to buy some quality headwear at half price.

After trying on a variety of colors and patterns, Chester selected a tartan plaid beanie. He was thrilled with his purchase. And he went back to climbing mountains with newfound vigor. And his head was no longer cold. And his fellow goats remarked on how stylish he looked. And he resolved to stop beginning so many of his sentences with the word “and.”

Perhaps Chester was not so stubborn after all.