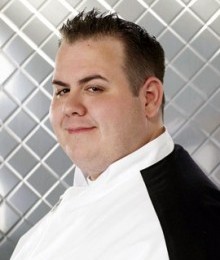 As challenging economic times continue in America, Chef Robert Hesse visits with CYInterview and shares some positive reflections. During two seasons of Hell’s Kitchen, Mr. Hesse increased his public exposure and had experiences helping make his life come together. Today, the chef is a partner in three restaurants he says are weathering the economy. What makes Robert’s story particularly compelling is that he went through plenty of challenges growing up, including being a young person who abused drugs.

Listen to the entire CYInterview with Chef Robert Hesse:

“Before Hell’s Kitchen, a lot of people don’t know, I grew up in a troubled background and was addicted to drugs, heroin and was basically in and out of boys youth homes and things and just not a very productive person in society. Then I got through that. I worked 22 states across the country…Cooking saved my life. Hell’s Kitchen and Gordon Ramsay just really opened the door to a lot of other great things and possibilities.”

People who’ve watched Hell’s Kitchen might recall Mr. Hesse as being overweight. After the show, he considered gastric bypass surgery but later decided against it. He ended up losing 75 lbs. on his own. During his time on the Fox TV show, Robert went through a divorce. Today, he has a new fiancé and a child on the way. Perhaps, this chef is a good example of what second chances can bring, as well as the benefits of reinventing yourself. He states it’s important for people to surround themselves with successful individuals so they can learn and think positively when it comes to their own lives.

“Decided, if I’m gonna put myself through all this, I mine as well just try on my own. I lost about 75 pounds since the last time I was on Hell’s Kitchen. Yeah. Things are going good. I have a new child on the way, a fiancé named Laura and a stepdaughter. So things are going good. I went through a bitter divorce in my first marriage from Hell’s Kitchen. But it just shows just when you think everything’s at your lowest, a new fresh breathe comes in and it totally changes the game…I always tell kids when I speak to them, go out there and fail cause your first failure is your next success. Make sure you get a couple of friends that are some older guys more successful than you. That should rub off. You know what I mean? Instead of the negativity rubbing off on you, maybe some of this positive things will rub off.”

Off camera, Robert says his reality TV mentor, Gordon Ramsay, is a pussycat. Maybe, his take on Mr. Ramsay will surprise fans of Hell’s Kitchen.

“Gordon Ramsay is probably the biggest pussy I’ve ever met in my life as far as like a pussycat. You know what I mean? All that is, the bark is definitely as strong as his bite, but when that camera is off man, he mine as well have like fluffy mittens on…he’s a little kitten. He’s got that smooth James Bond accent, so he can go tell you to go screw yourself with an accent and like a smile. Everybody’s like, ok. You know what I mean? He’s got a way with him. Women want to be with him and guys want to be him. That’s just the way it is. It’s unfortunate, I always joke about his hair. Every time I see him, his hair is like going crazy like he snuck his finger in a socket.”

Mr. Hesse is currently a partner in three restaurants: Georgica, Catamarans and Pssghetti’s. He says he is dealing with the economy successfully, breaking even or making a small profit at these establishments. He thinks people will remember a restaurant that serves up a bill for less money than they expect to pay. Robert adds that it’s a great time to open a restaurant as there are many great chefs out there looking for work.

“A lot of these fine dining restaurants had to look at themselves and say, hey, we can’t be charging these abnormous [sic] prices and not have any value. So even the rich want value…I say in this economy, if you’re opening a restaurant, there’s so many chefs, great chefs that are looking for jobs that you can really fill your kitchens with nothing but chefs and always have good food coming out of there because now their egos are set aside where they just want to make a paycheck…I’m not making millions of dollars, what I am providing though is a service. I’ll tell you the truth, all my restaurants break even, maybe above breaking even and that’s good enough for me right now in this recession…Eventually you’re going to be stockpiling this and sitting on top of the heap.”

With food costs rising in the United States, Mr. Hesse says his eateries have not been affected. He buys everything locally and says deals are there for the making. The chef’s long-term belief is that the economy will get better and, when it does, he’ll be there to reap the profits.

“I like to keep everything local and keep my local growers. I’m a firm supporter of get out there and support the little guy…They’ll work so many deals with you using them exclusively than to not use the big guys…What makes me successful is, I’m not trying to make a buck off the guy next to me. All I’m trying to do is run a business and if I can make a little bit of money, what I’m doing is investing in the fact that I believe that the economy is going to get better and investing into the future of this industry I believe in…I’m surviving is what I’m doing. I’m not making anything. You understand? The people that are successful are those people that are ready to weather the storm for the local man than to go out there and try to blindside them and try to get as much as they can and then they’ll be closed in six months.”

Robert Hesse shared with CYInterview a lot of exciting things on the horizon for him. He says there is interest in him doing Celebrities Biggest Loser. Hesse is currently in the process of opening Hank Aaron’s restaurant in Atlanta, Georgia. He is also working with Muhammad Ali corner man, the famous Angelo Dundee, on his upcoming restaurant, Angelo Dundee’s Corner, to open in either Miami or Las Vegas.

You can find more information about Chef Hesse at http://born2chefonline.com.