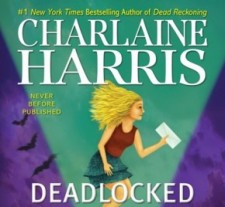 As her book tour begins for the latest installment of the Sookie Stackhouse series, veteran fiction writer Charlaine Harris – who has been at her craft for 30 years – brings us into her world. With some of her books translated into 20 languages, the number 1 New York Times Bestselling author’s fantasy fiction writings have made her one of the key players in the vampire craze that includes the Twilight movies and the True Blood TV series. The True Blood series is based on Ms. Harris’s books.

Below you can read the highlights and listen to the entire CYInterview for some interesting insights from one of America’s most successful fiction writers today and learn about her latest book, titled Deadlocked:

In October 2008, Charlaine Harris became the only author to have an entire series on the New York Times bestsellers list for her books on which the the HBO series True Blood is based. She believes fantasy fiction gets a bump in sales during challenging economic times.

“I think people particularly in economically depressed times are anxious to read something that really doesn’t bare much relationship to their daily life. So fantasy fiction also traditionally takes a bump in sales during depressed economic times…That was pretty soon after True Blood started airing and though my books had been selling very, very well before that, the screening of True Blood just gave them a huge bump and I was the beneficiary of that bump and all the books started selling suddenly even more than they had before. So it just, all the numbers just combined and that incredible week happened.”

When looking at her 30 years writing books, Ms. Harris reflects about what it takes to write good fiction and looks at how the Sookie Stackhouse series came together and what it takes to make a good series of books:

“I think you have to have a conviction that you have a story to tell and that you really think people will enjoy reading it. I think you have to have a lot of determination. I guess you just have to write what entertains you and hope that it will also entertain other people…Having started the series, there is a lot of pressure. I have to say most of it was self applied in the hopes that each book would be better than the one proceeding it. Sometimes I make my target, sometimes I don’t, but I always try. The first book was a hard sell. I’d been published many years before when I wrote conventional mysteries, but the first book was a leap for me. It was out of the genre people were use to me being in and it took a long time for my agent to sell it.”

Commenting on the latest book from the Sookie Stackhouse series titled Deadlocked, Charlaine shares with us what her goals were. The character Sookie Stackhouse is telepathic, has a vampire boyfriend and deals with many challenges in her daily life. Deadlocked opens with Sookie and her female friends at a male strip club:

“There was a lot to tie together, a certain amount of plot threads that I had to end or resolve in some way. Plus I had to show her further development as a character and the events and the various supernatural communities and human communities that comprise her world…I just thought it would be a good note to start the book on, not any blood and guts, something that has a serious undertone when one of the people there realize it’s her husband up on the stage. For research I talked extensively to a male stripper.”

With the vampire craze sweeping America in recent years, from the Twilight movies to the HBO series True Blood inspired by her books, Ms. Harris has given the most interesting answer I’ve heard to date on why vampire entertainment has been a hot sell in recent years:

“I think aside from the escape into fantasy in general, maybe vampires in particular because Americans are always trying to look younger than they are. They’re always trying to perfect themselves physically and vampires are frozen at the moment they were turned which was usually at their physical peak. I think that’s kinda the American ideal to be forever as you are. Not to age or change.”

With the age of technology continuing to move along at what some would say is warp speed, Charlaine gives her thoughts on the state of literacy in America and people reading books on electronic devices:

“I thought about it extensively as you might imagine, but as a matter of fact, I think that books being on small screens will actually encourage reading because people now are conditioned to look at screens. They love their little gadgets that they carry with them and I’m not trying to sound patronizing, I’ve got my own little gadgets, but I think since the advent of eBooks, I think reading is up. I actually think more people are reading because they can do it on a device they can carry with them in their pocket.”

With 30 years of writing fiction, NY Times Bestselling success and books translated into 20 languages, Charlaine Harris says tells us what she’s most proud of in her writing career:

“My greatest accomplishment is producing a book I’m proud of and looking back on a scene and saying I did that right. There are a handful of things in the books I’ve written in my life, maybe you know five to ten scenes when I think I just did that as well as I ever could even if I look at in ten years I’ll say, ‘I did the best on that I could ever do.’ And I’m really proud of that. I wish I could sustain that for a whole book, but writing like everything else has different levels of excellence and you just have to keep striving. Writing is never easy no matter how many years you do it, unfortunately.”

The following dates are listed below for Charlaine Harris’s Deadlocked book tour: