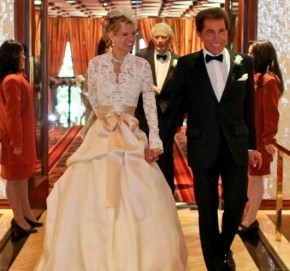 While this weekend much of the media’s focus has been on the Royal wedding of Prince William and Kate Middleton – now the Duke and Duchess of Cambridge – in London, Las Vegas played host to a star powered, UK tinged wedding of its own.

Steve Wynn, 69 years old and Chairman and CEO of Wynn Resorts, Limited married the lovely British, Andrea Hissom. The wedding took place at eponymous Wynn Las Vegas, one of the most highly rated resorts in the world. The Wynn made its debut in 2005 and its sister resort sitting on the same property, The Encore, opened in 2008.

Steve Wynn is famous as an innovator and entrepreneur in the gaming industry, having owned the Golden Nugget and opened such hotels as The Mirage, Treasure Island and Bellagio.

While Mr. Wynn commemorated his luck in love, his company, Wynn Resorts Limited, recently announced better than expected earnings. Some might say, “Win-Win for Wynn.”

What follows is a statement provided to us by, Deanna Pettit, director of public relations at Wynn/Encore:

“LAS VEGAS—Chairman of the Board and Chief Executive Officer of Wynn Resorts, Limited, Stephen A. Wynn and fiancée Ms. Andrea Hissom wed on April 30 in a private ceremony. The couple celebrated their nuptials with a gathering of 500 of their friends and family at Wynn Las Vegas.”

The wedding photo is credited to Brittany Hanson.

Steve Wynn, Andrea Wynn and Clint Eastwood are in the photo used for this piece.