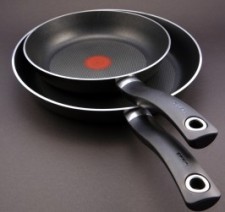 Cooking shows, ever watch them? Some guy or gal, billed as a professional chef or renowned cook, stands in a well appointed kitchen and starts preparing something that would make a cardiologist cry. Okay, not always. Some of the stuff, sometimes, is healthy fare. Tellingly, I cannot recall any of the healthy dishes.

Each time I see a cooking show it seems to revolve around certain ingredients. There is, for example, butter, wine and heavy cream and none of it seems to be used in shy quantities. Delicious things get whipped up, left and right, utilizing those ingredients.

Want to make a delicious steak? Cook it in butter. Make better cookies? Use butter. Sautee something that will make your mouth water? Use butter and wine. When in doubt, find a way to work in heavy cream. Then, of course, you can toss in heaping dose of sugar to make a confectionary delight. This is the message I take away from most of these shows.

I am no cook. My kitchen skills revolve around opening cans and jars. If I am not careful I could over boil water. But I do know how to eat. I am thinking that many things would taste good if you used butter, wine and heavy cream. You could probably take an old sweat sock and make it pretty tasty using those ingredients.

However, is this type of cooking practical or healthful? I mean, after a hard day of work, do you really want to start making something using those ingredients. Isn’t it easier to open a can of salmon, surround it with some veggies and have an apple and some almonds for dessert? If you wanted a more substantial meal, you could accompany it with a sweet potato topped with salsa.

Not only is the above mentioned style of food preparation more practical then getting out the butter, wine and cream, I think most of us would agree it is more healthful.

Now, am I knocking cooking shows? No way. In fact, watching them can be kind of fun. Am I against delicious foods? No way, I like eating them. However, most of the time, for the sake of health and efficiency, basic eating of good foods – that have not been doused in salt or sugar and have not been lathered in butter, wine or cream – is the way to go, at least for me.