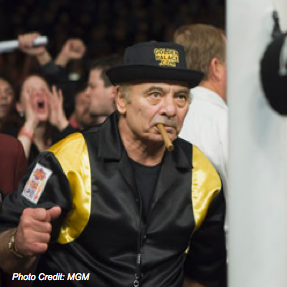 The character of Paulie has been captured through all six Rocky movies and is someone people can relate to. Oscar nominated actor Burt Young has been there for the whole ride with Sylvester Stallone. The last chapter of the Paulie character stars alongside Stallone one more time in Rocky Balboa, which opened on December 20th to surprising box office numbers. Burt talks about Rocky Balboa, the Oscar nomination for Rocky, and other topics.

Chris Yandek: Many people didn’t have real expectations for the Rocky Balboa movie. Are you pleased with the box office results and the fact the movie upgraded to the times of today and was it good ending this six movie franchise?

Burt Young: “Well, I wouldn’t say ending. You never know with that kid Sylvester. We went back to the feeling and the grit of the first one. Stallone was like a man possessed. I know it could fair with the intensity he brought with him. It was very exciting hanging around with him.”

CY: What did you think when Slallone called you and said I need you for one more movie in the franchise 16 years later?

BY: “It didn’t happen like that really. We got turned down. He did. He wrote two scripts and he got turned down a second time. He came to me and said read this and see what might have been. Tell me what you think. I read it and I said we must do it Sylvester. You wrote three of them. It’s clear and crisp. We must do it. He says you don’t think with me being 60 years old. You can’t say no. We are gonna do Rocky Balboa so we can’t say no. We can do as people, as humans, just about anything or at least attempt. That’s how we went into it.”

CY: Do you think it was hard for him when the skeptics were thinking it wasn’t believable or did you feel there were any worries about making it believable on his part?

BY: “I know his wife was worried for the physical things he was going to go through. He was not only starring in it, but he was directing in it. He always had his hands on every aspect of the product. She was really scared for him, but I was very proud of him from beginning to end.”

CY: Paulie seems to have a lot of regret in Rocky Balboa, is it just because he didn’t treat his sister Adrian well and now she is dead and Rocky has a hard time moving on and Paulie feels sorry for him or is it something more that Paulie is dealing with?

CY: Do you think people relate to Paulie’s struggles that he is older, the world has changed around him, and things aren’t what they used to be for him?

BY: “Well, Paulie, I get a kick out of Paulie. Paulie I describe to myself as half empty. He’s always running on half empty. He’s a lonely guy. He is a sad guy. When he had his sister, he could have someone to blame. He could have someone to put the blame on. When he gets angry with Rocky, he has someone to put the blame on. The biggest problem he had is when he looked in the mirror and he sees it’s only his fault and that is the problem he tries to hide.”

CY: Do you have a favorite story or memory from this one while on set with Stallone and the rest of the cast?

BY: “One of them was the last shot of the movie out of sequence when he was running up the steps with that mange dog. It just starts to snow blurry, and the whole company, hundreds of them behind the camera watching, it was breathtaking. He became really my hero during this movie. We were fighting in Las Vegas and with a real audience they’re ready for a fight. We are leaving the arena at the end of his match and we turn him back to face his audience before exiting and the audience was thundering. It was almost too much for me to handle.”

CY: Are Paulie and Rocky the best example of the friendship that lasts no matter how they affect each other and their flaws?

CY: You got an Oscar nomination for Best Supporting Actor in 1976 for the first one. Looking back on that 30 years later, do you ever think about why you didn’t win or are you just happy you were nominated?

CY: How did you originally get cast for Paulie and what was your first opinion of Stallone when you met him?

BY: “Well, I was the only actor that didn’t have to audition. They sent me the script. It was very low budget. I read it. I didn’t know who Stallone was. I read it and thought it was probably the most brilliant script I ever read. I write myself also in this one. I went to California and was dragging my feet trying to get a couple of dollars from them which they didn’t have. Stallone comes to me and says, ‘Mr. Young. I am Sly Stallone. I wrote Rocky.’ I said, ‘Well kid congratulations, it was wonderful. You did great.’ ‘You gotta do the movie.’ I am gonna do it. Let me twist their arm and try to get some dollars. He smiled like a pumpkin and that was the beginning.”

CY: What is Paulie’s place in cinema history you think?

CY: What are your thoughts on how the movie and TV business changed since you started acting in the early 1970s?

BY: “It’s gotten to be more conglomerate owned. It used to be that a studio’s product was recognized by its leader. Not as many leaders. Somehow you can’t aquate a studio with a certain type of movie anymore. It’s a pretty corporate decision making process. It’s also become a matter of two to three weeks to see if you have a hit or not. A lot of good projects don’t have the chance to get legs. I am sorry for the audience for that. Life does change. There are many great things that took place with change, many great movies. I used to remember when a director carried his gang with him. He had a team and it was a pleasure. The younger directors really don’t have that voice anymore.”

CY: Besides being a performing artist you are also a successful painter. Tell me about your artwork that has been shown in many different art galleries and what motivated you to paint?

BY: “Well, I always painted. I won a contest when I was 12 in New York. I painted and I get so much excitement out of it. I am color driven, sometimes a beautiful woman. I had the pleasure of my own choices. I don’t get edited. We have a website and I have exhibits in Montreal. I am supposed to go to Moscow. I am looking at my work. I just had to empty out a good part of my house. I couldn’t walk. I am prolific. Even when I was doing Rocky Balboa, I was painting in the Four Seasons in the bathtub.”

CY: Finally, what would you like to say to the loyal Rocky fans that watched you through six movies?

BY: “Thank you. Don’t ever count us down. As crazy as Stallone is, there might be another. Thanks for having us. We really appreciate it very…very much.”

Rocky Balboa is out on DVD now. You can check out www.rocky.com for more information on the movie.

You can check out Burt Young’s film and art work at his official website www.burtyoungartandfilm.com.
Photo Credit: MGM

One Reply to “Burt Young”