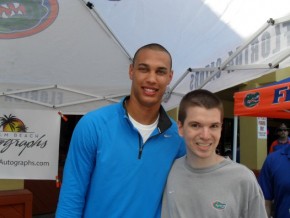 An old saying goes, “You never know who you’ll meet on vacation.” Every so often, I take a little time off from CYInterview.com. Sometimes you just have to step away from the 24/7 media cycle.

As some of you might know, I’m a graduate of the University of Florida. I grew up with Florida football and am part of the Gator Nation. CYInterview’s archives contain conversations with plenty of former Gator players.

This past weekend, after attending the annual spring football Orange and Blue game on April 8th, I had a chance encounter with Buffalo Bills wide receiver David Nelson. David is a former Gator who ended his rookie year with the Buffalo Bills by catching a few touchdowns. He described how Buffalo was treating him in one word, “Cold.”

I also got to meet current Florida Gator/sophomore defensive end Ronald Powell. Powell was ranked the number one high school football prospect for the entire United States in 2010. Many are expecting Ronald to deliver big for the Gators’ defense in coming seasons.

As far as how spring football went, there is still a long way for this Gator team to go as it adjusts its offensive. A positive for fans is that yesteryear’s aerial attacks – led in glory days by Steve Spurrier – may be back. At this past game, it was nice to see some long passes. We’ll have to wait and see if the trend continues into regular season and if it pays off as part of the offensive regime under Charlie Weiss.

If my 24 hour vacation has a moral of the story, I suppose it’s this: Bring your camera everywhere; you never know who you’ll run into, or who will run into you.