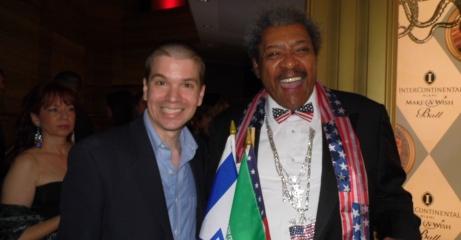 Don King has promoted some of the most compelling boxing matches in history. The controversial promoter is tied to some of the great heavyweight boxers of the latter portion of the 20th century, like Muhammad Ali, George Foreman, Joe Frazier and Mike Tyson. Some of his most widely known accomplishments include the “Thrilla in Manila” between Muhammad Ali and Joe Frazier and “The Rumble in the Jungle” between Muhammad Ali and past CYInterview guest George Foreman [see here].

We caught up with the outsized boxing personality recently at the InterContinental Miami™ Make-A-Wish Ball, where Don told us what is coming up for him and gave his thoughts on the state of boxing.

Speaking about lending his support to the Make-A-Wish Southern Florida™ chapter at this year’s event, Mr. King told us this:

“It’s fighting for those who are less fortunate and those who are close to God and God chooses them early sometime because he loves them very, very much. So Make-A-Wish is here to help others and let your heart go out to them in need.”

“Well, I’ll be in Germany on December the 14th. I’m taking a Native Indian, that’s a Native American before Christopher Columbus discovered it and he’s gonna fight for the world title. So I’m getting the aggregate of all the tribes, the Apache, the Sioux, the Cheyenne, the Blackfoot, you know and try to put them altogether to cheer this guy to try to bring that back to America.”

Giving his thoughts on the state of boxing, the legendary promoter said this:

“The state of boxing needs a hero. We need a hero that can relate, identify with the people and when he can do that they get up close and personal and then we can bring back the glory days of boxing when you have those people that they can relate to and identify with and be apart of and that’s what we’re looking for, we’re in search of. So in the meantime we gotta do the best we can with what we have to work with.”

2 Replies to “Boxing’s Don King on Hand at the InterContinental Miami™ Make-A-Wish Ball; Talks About His Latest Doings in the World of Pugilism”