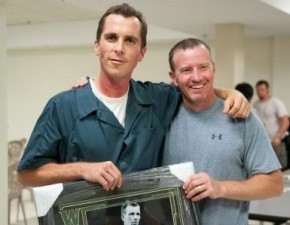 Melissa Leo and Christian Bale accepted their Oscars at this year’s Academy Awards, for The Fighter, with former WBU Intercontinental Light Welterweight and Light Welterweight champion Micky Ward in the audience. The two actors thanked him and others who worked on the film. The story of Ward’s life as a boxer was one of the Best Picture nominees at the Oscars this year. With the DVD release of the movie this week, we welcome Micky Ward to talk about The Fighter, as well as other topics.

Following a biopic, people are always wondering what in the movie was accurate and what was added for entertainment value. Ward says his mother, portrayed by Melissa Leo, was never really in the gym. However, he believes everyone working on the movie did the best job they could.

“The fighting with the sisters and stuff all happened. That happened and continues, arguments, you know what I mean? Not fist fights, but arguing. Those sisters going to the actual gym, they never went to that gym when I was training and stuff like that. My mother never really came running into the gym and all that. In a round about way, everything is pretty much right on, you know what I mean? Obviously it’s kind of hard to make someone’s life into two hours. I think they did the best possible job they could now portraying it, every little thing wasn’t exactly like it was or right on.”

In the movie, Christian Bale portrays Ward’s brother, Dicky Eklund. Eklund is a former boxer whose most famous fight was with Sugar Ray Leonard. In The Fighter, Dicky’s battle with cocaine is apparent. In 1995, HBO profiled Ward’s brother in a real life documentary called High on Crack Street: Lost Lives in Lowell. There is a scene in the movie with Micky Ward, played by Mark Wahlberg, watching the documentary as it was airing. Mr. Ward gave his reaction to the documentary, his brother’s personal struggle with drugs and how he’s doing today.

“It was tough watching him go through it. But you know, it was the best thing that happened to him, going away and all that, because if it didn’t happen, he’d probably be dead right now. He’d probably be dead or in jail for the rest of his life. But it was hard to watch, but I think it was the best thing. Hey, he was the one doing it, so I mean, you gotta pay the price. Do those things, it comes with a price. That’s the price he paid…He’s doing good. He’s training some fighters in my gym and stuff. He’s doing good. He’s trying to stay straight and narrow. It’s a struggle every day I believe. You know what I mean? He’s doing good. He’s keeping his head on. He really likes what’s going on.”

Some of boxing’s biggest enthusiasts maintain that Ward’s three match-ups with Arturo Gatti are some of the greatest fights ever. Two of the three were named Ring Magazine Fight of the Year. Ward says what comes to mind about those fights was the friendship that came out of them with Gatti. He was shocked when his follow pugilist died. He says he thinks about him every day, in some way.

“Hospital visits, stitches, all that stuff. Just a good friendship honestly. We really got a great friendship out of my three fights. Obviously we weren’t friends going into the fights, but we have a mutual respect. After the three fights, we became close and he became one of my good friends. Tragically his life got taken from him at a young age…I was shocked when I heard it. Every day I think about him in some capacity. Every day I think about him.”

During Melissa Leo’s acceptance speech for Best Supporting Actress, Leo dropped the “F-bomb” as she was thanking Micky and others who made The Fighter come together. This is what Ward thought about her moment of accidental profanity during her acceptance speech:

“I think it was a combination of so shocked she won and just being excited and just letting the world know she was so excited. Doing that, maybe she just slipped up, said the ‘F’ word. It happens. It happens and I don’t think she meant any bad intentions of it or anything like that. It’s just being excited from that moment and it got away from her I believe.”

Next week, boxing legend Sugar Ray Leonard will head to the dance floor in Dancing with the Stars. Coincidentally, Sugar Ray has a cameo appearance in The Fighter opposite Christian Bale. I asked Micky how he thought Sugar Ray would do on the hit ABC show.

“Sugar Ray will do really good. I’ll tell you one thing, he’s probably one of the best boxers in boxing in his era or any era for that matter. So I think it will be very good. I think he’ll do good. He’ll make it. He’ll go very far. I don’t know if he’ll win. He might even win. Who knows, but he has the foot work to able to do it.”

The picture used for this piece is credited to Paramount Home Entertainment.

The Fighter is available on DVD now. You can purchase a copy and find out more information Clicking Here