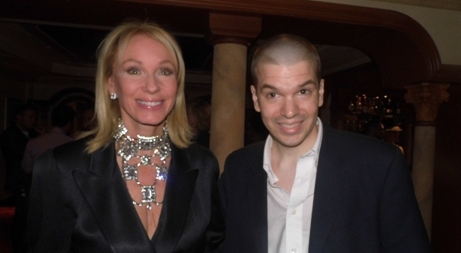 This past Friday evening, members of the cast of The Real Housewives of Miami and country music star John Rich met up at Roy and Lea Black’s Coral Gables home for a special get together/cocktail party. Above you can see me with Lea, who is an absolutely superb hostess by the way.

At the party, in addition to Miami’s beautiful people, there were mouthwatering hors d’oeuvres and plenty to drink. Guests were treated to classical music until John Rich arrived and performed in the living room. Before his performance, we had a chance to do a sit down CYInterview with him, covering his career, politics and much more. Our candid conversation with the country music star will be released exclusively, here on CYInterview, in the coming days.

Guests in attendance at the shindig included Lea’s fellow Real Housewives of Miami cast members Joanna Krupa and Romain Zago – who are soon to be wed, the recently married Adriana De Moura and Frederic Marq, Lisa and Dr. Lenny Hochstein, Alexia Echevarria and James Davis, who when in drag, is none other than the fabulous Elaine Lancaster. Former Real Housewives cast member Dr. Karent Sierra of the TV show The Doctors and actor/singer Frankie Grande were also in attendance.

Many will recall our coverage of Roy and Lea’s The Blacks’ Annual Gala over the last two months. You can see that coverage here, here, here and here.

Check out all the photos from the spectacular evening below:

You can find more information about Lea Black at her official website www.theworldofleablack.com