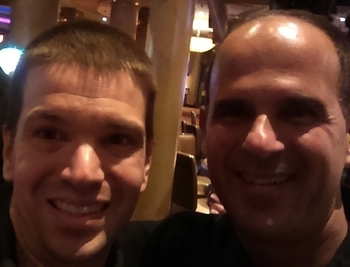 On August 3rd, CNBC Star Marcus Lemonis of The Profit brought the network’s cameras down to Caesars Palace. Marcus, who admitted at the craps table that he had no idea how to play, shot some dice with a man and a woman he was videoing with, for an upcoming CNBC special.

We had a chance to speak with Marcus for a few minutes after he was done. You can see our photo above at Caesars Palace.

The investor and television personality is known for investing money in struggling small businesses across America, on his CNBC show The Profit. He does this in hopes of turning them around.

A day prior to his taping at Caesars Palace, Mr. Lemonis was in Downtown Las Vegas shooting with Derek Stevens, who runs the Fremont Street casinos The D and Golden Gate.