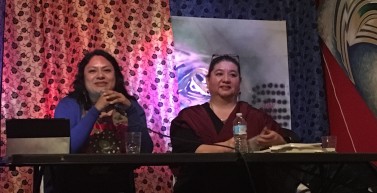 The third day of the third month, year two thousand and seventeen. A café named “La Catrina” in Pilsen, a neighborhood in lower West Chicago. People gather to experience the artistic expression of women as Women’s History Month begins. Xánath Caraza and Irma Pineda Santiago, take the stage capturing the audience with poetry.

As it often happens in places where community comes together, ideas come to life in collaboration with others. The confluence of efforts of Contratiempo, Cultura en Pilsen and Café La Catrina, brought Poesía de origen, a reading of bilingual poetry by two poets whose life and writing are deeply connected to the original cultures of this continent, America.

One might imagine a bilingual poetry reading in Chicago might involve English and some other language, but that was not the case here. The audience attending Poesía de origen, was delighted listening to the voices of Caraza and Pineda Santiago deliver poetry in Náhuatl, Zapoteco and Spanish. To start off, Caraza asked the crowd if they knew how many languages were spoken in Mexico. Sixty eight is the answer.

Although Xánath Caraza is not a fluent speaker of Náhuatl, this is one of the languages spoken in her maternal family. She has had some of her poems translated to this ancient Mexican language and she also incorporates concepts and words from Náhuatl into her poetry. During her reading, the audience chanted responsively, in Náhuatl repeating the names of Aztec goddesses she mentioned in her poetry. Those included, Yoloxóchitl, Tonanzin, Xochipilli, Cihuacóatl, Coatlicue.

Caraza followed with poems from several of her books. She read some favorites, like Yanga, a poem honoring a freedom fighter from Veracruz, Mexico who was the founders of one of the first towns of free African immigrants in this part of the world. The sounds of Africa embedded into the Spanish language displayed in Caraza’s poem are always a gift to the ears of listeners, especially those with a connection to Veracruz.

Then it was the turn of Irma Pineda Santiago. She filled the room with the beautiful sounds of her poetry in diidxazá (Zapotec language), followed by the Spanish language version of each poem. She made our hearts sink with poems about social justice and next, Pineda Santiago picked up our sunken spirits by making us laugh with a joyful poem.

Pineda Santiago is a bilingual poet whose poetry has been published and translated into many languages. The poems she read in Pilsen ranged from those about love, injustice, and the wise advice of an aunt regarding a woman’s sensuality. She got the audience to laugh, reflect and even sing a chorus of one of her poems.

For more on these two amazing poets, please look them up on the Internet. You might just be lucky enough to hear them on both sides of the border.

Pictured in the photo above are Irma Pineda Santiago left
and Xánath Caraza right.