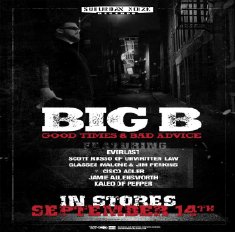 At 6’7 and 330 pounds, rapper Big B is literally one of the biggest men in music. A former security guard, he’s worked the bodyguard scene to make a living. However, from an athletic standpoint, even with his larger than life size, he says he never had any interest in sports – as a football for example.

Listen to the Big B CYInterview:

“I used to do VIP security and do different things to try to make ends meat. But the sports things never really been a big push for me to want to do… I’ve never been into the football thing. I got pushed a lot of times to play and I think that’s what, you know, [pushed] me off from it so much.”

Now, with a continuing upward trajectory in his music career, B admits things weren’t always so great. He’s been in and out of prison a few times and feels fortunate to have landed on his feet. His advice to others is to look forward in life and not dwell on the past.

“I’ve definitely been in and out of jail when I was younger, in trouble, but never any big long times doing. I’m just been really lucky to land on my feet so many times. If you dwell on what’s happened or even the past or whatever, it’s just gonna bring you down. Like for me, I’m one of those guys that knows just if you just keep on moving, it’s going to be alright. You have more chance for failure if you just sit in the same place. If you keep on moving, something is gonna happen.”

So focusing on those difficult times in his life – including some prison time – B says that’s where he pulled some of his message from in his popular song, Sinner.

“I definitely have issues out there with different things. I don’t know if it was to the extreme of the song. I’ve been married a long time. I have two daughters, but the road just beats me up and kind of was just saying, no matter when I go out I come back. Everybody has a little sinner in them whether they want to admit it or not, you know. No one’s perfect. So that’s where that song kind of comes from. When we made the song, I never thought it was going to be a big hit. I was just making music ‘cause I’ve always been an underground artist. So this last couple of years it’s been kind of crazy getting bigger and bigger and bigger.”

Even with his recent success, as well as support and endorsements of high profile artists including Pink and Alicia Keys, Big B isn’t buying all the hype because he’s worked on his craft for a long time. He’s also seen some of his famous friends left with nothing after their success rides came to a halt.

“I worked so many years. I still go to the office. After we’re done here I’m going to the office to work. I’ve seen so many friends whether it’s action sports, even in the NFL and music that just start believing their own hype and then what happens two years from now? … Successful people don’t brag about what they have and they keep on moving forward and they just stack the chips away and do whatever they’re gonna do and whatever makes them happy and then there’s the guy that has to tell you how great he is and try to live the life and I’m just the opposite of that person.”

Big B’s latest album, Good Times and Bad Advice, is now out. You can find out more about the big man at his official website www.feedbigb.com

Produced by: Bridget Zeuner at www.bridgetz.com

One Reply to “Big B: Music’s Big Man, in More Ways than One”