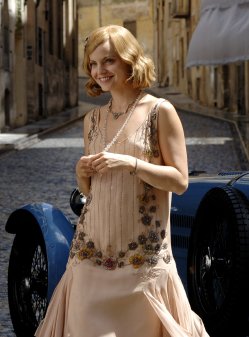 We recently brought you a tidbit of our interview with American Beauty/American Pie actress Mena Suvari. Here is the rest of the dialog, with Ms. Suvari, covering her latest role in Hemingway’s Garden of Eden – out in theaters December 10th.

Some of Mena’s fans have been engaged in online conversations regarding why she hasn’t had more high profile movie roles in recent years. Ms. Suvari addresses this, in depth, talking about the business/political side of Hollywood and how she’s made the decisions for the direction her acting career has taken.

Listen to the Mena Suvari CYInterview:

Chris Yandek: In Hemingway’s Garden of Eden, which will be out in theaters on December 10th, you play this woman who seems to have, I would say numerous issues in her life and are tied to many things. What were your thoughts when you decided that you were going to play this very, I guess you could say, heartless woman?

Mena Suvari: “Heartless? No. I don’t think she’s heartless. She, I was really excited when the script came to me. I loved it and then I read the book right away. I just, I see Catherine simply as a woman who’s trying to find her own identity and I know that she comes across cutting and manipulative at times and things like that sort, but I think it really stems from a lack of confidence within herself. I think that she’s unhappy. I think that she is trying her best really. She’s not even, it’s like this discovery process for her. Even finding out, you know, honoring these different aspects of her. She doesn’t think in the broader perspective. It’s just kind of, it’s almost, spontaneous. She goes and she cuts her hair off and then she brings another woman into the relationship. I think it’s like this over compensation that she feels and portrays. I think that really just stems from this sense of loss really and insecurity.”

CY: There’s a lot of sexuality in this film. Have you ever been nervous about filming sex scenes, or is it something that you’ve always been very comfortable with?

MS: “No. I mean, I’ve never been comfortable with it. I think it’s probably really uncomfortable for most people, but that’s why, you know, I mean, this to me, I don’t, I don’t single the sex scenes or the sexual aspect of this film out. You know, I really see it as part of the whole story. I see it as part of the transformation of their relationship and Catherine in general. I feel grateful that we had such a wonderful cast and crew. We had an amazing director and everybody was so passionate about making this film and so professional about it. I felt very supported by our director John [Irvin] to really guide me through every moment and especially when you’re doing any kind of sex scenes. They’re fully mapped out for you.

There’s a certain way that I like to work and have it be very intimate and closed off on set. John broke everything down for us and the types of shots he was going to use and the lighting and everything for Jack [Huston] and I to feel comfortable. So I think when, there’s a certain point where as an actor you just kind of have to trust and go with it and you can only do so much beforehand. I felt like I had all this support from John and was on the same page with him. But again, I saw it as really, it’s a big part of just this story. I hope that people don’t see it superficially like that at all or take it out of context because it’s really, it’s the moment where you see Catherine at her basics really transforming.”

CY: At one point and time you had this American combo in the amazing role in American Beauty and the role in American Pie, you seem to still be working as much as ever but the profile seems to be different. What really has changed for you?

CY: What I was reading mostly is that fans were like, we know that Mena is doing all this work, but we don’t see her in these huge profile movies as often was what most fans were saying.

MS: “Cause it’s never been about the medium really. It’s never been about where the material lies. I never wanted to put limitations on myself. When I started in this business, I worked my way up from commercials to you know, hour dramas and independent films and then you know, working on American Pie and American Beauty, I had no concept of what studio movies were or the Oscars and the Academy or the whole political business aspect. That’s the thing that many people, they’re not exposed to. You know, they don’t know about a lot of the politics that go behind, you know.”

MS: “Yeah, closed doors and moviemaking and decision making and for me I’ve been in this for about 18 years and I have these discussions all the time. I have these discussions with like actors and everyone. It’s just, the business has changed so much where you have a lot of corporate heads that are making decisions and studios have the filmmaking and the types of movies that are being made. It’s completely changed and especially in the last few years independent companies have shut down or been bought out. There’s not, it’s almost like, for me, because I’ve always been really passionate about art and the creative aspect of what I do and I had to learn about the business aspect.

After American Beauty, all of the sudden it’s like you’re forced to go here and go there. I honestly thought that every movie made like 100 million dollars. I had no idea about what any of that meant. I was just happy to have a job and be working and have fun on set. That’s what I like to do. I like to hang out with the cast and crew. I love the collaborative effort that goes into filmmaking and I love to challenge myself and learn from the roles I play and grow with that character. Everything that I’ve worked on has affected me personally. I learned so much about myself. Indirectly I discovered new aspects of my personality that I didn’t even know were there.

So I think what happened for me is you know I got to this point where when you’re looking at it from like the business standpoint, you know it’s like, if you’re looking at it like a mathematical equation, you kind of do studio movies and then you make sure you’re working with this director and this actor is in it to kind of raise your profile this way and then you can get awards this way and then it will get you more money here and you know get us this opportunity there and I didn’t look at it like that. I wanted to follow the material.

I wanted to explore. I think that’s part of why I’m so drawn to Catherine. I wanted to do what I wanted to do. There were a lot of things that I turned down that were considered huge studio movies because I didn’t identify with the character. I felt like there was nothing I could do with it. I mean I’ll even turn down an audition or meeting because I know that I’m not right for it. You know, I really believe in the art of it. When I’m working on something, I’m putting my heart and soul into it and burying myself. Yes physically as well, but emotionally and mentally. I want to make sure that I’m fully committed. There was a time where people, because it’s all about in the business it’s all about labeling you. They want to put you in a box and you know I have to forever be Angela from American Beauty and I have to be blonde for the rest of my life and I have to play those same kinds of roles because that’s what worked because business wise, that’s what’s gonna make money.

But I’m not that person. As I grew, I was like 19 when I worked on that movie. I’m almost 32 and there’s so many things I still don’t know about myself and I just want to keep challenging myself. So I was drawn to that kind of material where people considered it indy. I was the indy queen. I never put labels on that. I just was interested in following the story and anytime that kind of material that was so crazy and weird and challenging fell in the independent world because if you look at a lot of commercial films, especially now, it’s like comedies, horror or like super effects.

I’m really interested in the human condition. I’m really interested in that character study and growing. Also again for women, it’s really, it’s difficult. Not only this world, but in the entertainment business, it’s like, yeah I could choose to work on a studio movie where I’m just the one- dimensional girlfriend who has two scenes, but I’d rather not. That’s not where my heart and soul is and again that’s why Garden of Eden coming to me. It’s about this woman. It’s about her. It’s an interesting story to tell and again, we shot this movie almost four years ago and it was an absolute miracle I think that Roadside Attractions came along and picked it up because to most people, they don’t know how to market it.”

Hemingway’s Garden of Eden is out in theaters December 10th. You can find more information about the movie clicking here.

2 Replies to “Beyond All Americans: Mena Suvari on Hemingway’s Garden of Eden and More”