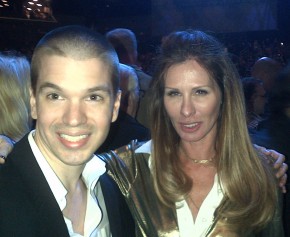 In previous coverage of the Barbra Streisand concert in Brooklyn, New York [see here], we informed CYInterview followers that we met John Travolta and Faith Hill in the area outside the VIP after-party, at the Barclays Center. Prior to those festivities, however, we met a few celebrities during the event itself. As mentioned previously, there were numerous high profile individuals seated on the arena floor, from Liza Minnelli to Gayle King to former Secretary of State Madeleine Albright.

Sitting three rows in front of us was Carole Radziwill of The Real Housewives of New York. [Ms. Radziwill can be seen with me, above.] She is a NY Times Bestselling author and Emmy award winning journalist. She is also a princess, by virtue of her marriage to the late Anthony Radziwill. Anthony was the son of Prince Stanislaw Radziwill of Poland. Carole is also related to the Kennedy family. Her late husband’s mother is Lee Radziwill, the sister of former first lady, the late Jacqueline Kennedy Onasis.

While a journalist at ABC, Carole was a globe trotter. In speaking with her, it’s clear that she is both a kind and compelling individual. We are looking forward to having her on CYInterview soon.

Last but certainly not least, sitting next to me was actress and singer Lynda Carter along with her husband Robert Altman. Many will remember Lynda as Wonder Woman, in the TV show The New Adventures of Wonder Woman. Ms. Carter expressed her great enthusiasm for Barbra Streisand when we spoke during intermission.

Last year, Ms. Carter – still a radiant beauty – released her third album titled Crazy Little Things. Lynda Carter is as charming and interesting as she is beautiful. Like Carole Radziwill, a pretty woman herself, we are looking forward to having her on CYInterview.

There is just something about a Barbra Streisand concert that brings the stars out; the stars – and, of course, the rest of us who love to listen to the timeless stylings of Ms. Streisand, a most talented and spectacular performer.

You can find more information about Barbra Streisand’s concert tour at her official site here.