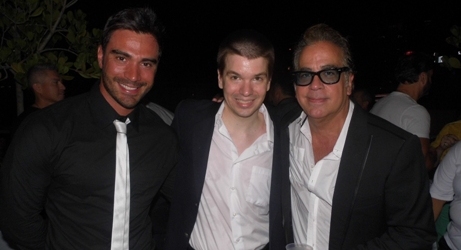 At the evening’s festivities was director/producer Richard Jay–Alexander. He has worked with a who’s who on Broadway and has ongoing working relationships with stars like Barbra Streisand and Kristin Chenoweth. Over the last year, Richard toured the world with Ms. Streisand for her latest set of concerts.

Also at the event was Brazilian model and actor Rodiney Santiago, best known from the TV show A-List: New York on the Logo channel. What started as a CYInterview turned into an industry discussion between these two men as Richard was thinking about career possibilities for Rodiney’s future in show business.

To get an example of how show business relationships might begin, it is worth listening to this CYInterview. You can listen and read the highlights below:

Listen to the entire Richard Jay-Alexander and Rodiney Santiago CYInterview:

Sharing a little bit about his life as a director and producer, Richard Jay–Alexander told us this:

“I’ve been working with Barbra [Streisand] for 14 years and if you look at the body of my work because I come from Broadway, all of the singers and acts that I do are actors who sing right. So the world experiences are pretty fantastic and I was just telling Rodiney that I did a film with Amy Irving and Bruno Barreto in Rio called Bossa Nova which he didn’t know about, but it’s very interesting. Your career takes you to places. I feel like I’m living a fairy tale because as soon as I go, I need to go to Rio and you get a movie. I need to see some shows in [Las] Vegas and I get Donnie [Osmond] and Marie [Osmond]. …

It’s very interesting. I think sometimes people, you know, think that people only do one thing and everybody loves discovering something or resurrection. You know, I discovered Lea Michele. I put Ricky Martin on Broadway when everyone told me that they didn’t know who he was, but I did and then took him to Desmond Child and Livin’ La Vida Loca was born. These things are interesting. My track record for sort of discovery or zoning in on something is pretty good, but you have to have the whole story.”

Along with Richard, Brazilian actor and model Rodiney Santiago was one of the evening’s hosts for the Miami Beach Gay Pride Soiree. He just recently moved to South Florida and the upcoming Pride weekend, in 2014 will be his first:

“I’m very excited to be here tonight and support this event. … Next year is gonna be my first pride in Miami so I’m very, very excited. … I just moved to Miami.”

Over the last year, Mr. Alexander toured the world working with Barbra Streisand, during her latest concert run. On November 25th, a DVD and CD are being released of Barbra’s performances in Brooklyn from that tour which we attended last year [see here and see here]. On November 29th, PBS will air a special of Barbra Streisand’s concerts in Brooklyn. Asking about his favorite moment from those experiences, he told us this:

“Oh, wow. There’s so many. I’m so glad you asked though. You know why? A tour morphs. When we did Back to Brooklyn, we did a lot of stuff that didn’t make it to the road or as far as Israel or whatever. And I just watched the final, which goes on PBS on the 29th of November and she sang Being Good from Hallelujah, Baby! and I remember what that cost. We were there all summer long, papers on the floor, how, you know, and so when she sang it, I burst into tears because we hadn’t done it on the road. We did it just in New York and Jule Styne of course wrote Funny Girl also. So it’s these things.”

During this CYInterview, Richard had wonderful things to say about his parents. Sadly, his mother, Dulce Fernandez, recently passed away. We extend our condolences to Mr. Alexander and his family at this difficult time.

You can find more information about Miami Beach Gay Pride at www.miamibeachgaypride.com.

You can find Richard Jay Alexander on Facebook here.