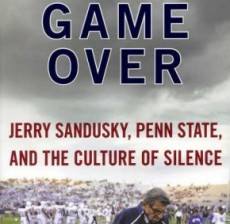 In a new book released recently titled Game Over: Jerry Sandusky, Penn State and the Culture of Silence, authors Bill Moushey and Bob Dvorchak detail numerous events in which they say Jerry Sandusky sexually abused minors. What follows are the highlights of this CYInterview, along with a complete 35 minute audio of our conversation:

Listen to the entire CYInterview with Bill Moushey and Bob Dvorchak:

It has been reported that in 1998, Jerry Sandusky was investigated because a young boy told his mother that he had showered with the former assistant coach. Bill Moushey says the most troubling part about this is that the alleged inappropriate behavior continued:

“The most troubling part about it as I told you, we built timelines on both sides of this was that between 98 and 2011 when the charges were filed, there were at least ten more accusers or ten total accusers, two more filed lawsuits like Bob said and then there’s also an ongoing investigation which we won’t know much about because it is under, there’s a gag order on all trial participants right now.”

“I think what happened is that somebody comes forward with a story and the first reaction is disbelief, to not believe that this could happen to a man of Jerry Sandusky’s stature at an institution so prestigious as Penn State. But whether or not it starts as disbelief or denial or arrogance or even hubris on their part, the fact of the matter is that as they’re allowing these things to go on because of their inaction that more young people are subject to circumstances that scar them for life.”

After allegations came out that Jerry Sandusky utilized his Second Mile Organization to attract vulnerable, underage boys and with the subsequent firing of Coach Joe Paterno, Penn State decided to play their then upcoming football game against Nebraska. Why didn’t Penn State cancel that football game, as well cancel the rest of the season and, perhaps, even the following season? Bob Dvorchack answers the questions:

“Nebraska coach Bo Pelini was one of the ones who said, ‘Maybe, why is this game going on? There are kids’ lives at stake here. This is a football game.’ I think even the coaches had it in perspective. But you’re exactly right. Sports is a game, it’s a diversion. In the grand scheme of things it means nothing. The brand of Penn State University means nothing compared to the welfare of a child…It’s a great point you raise is maybe they should even cancel football for the entire next season. Not a moment of silence, but a season of silence and let’s reevaluate and reexamine ourselves and make sure our priorities are straight…

I think money plays a major part in this. But this is why I say it’s a cautionary tale for every college administrator in the country that maybe, there must, not maybe, there must be some self-examination and reexamination of these programs and these big time college revenue generating programs that have you lost your priorities? Are you sacrificing your mission as a university and are you sacrificing your responsibility to society to allow something to go on when it’s clearly wrong.”

Though there are those individuals who focus on late, former Penn State football coach, Joe Paterno, when it comes to the horrific allegations against Jerry Sandusky, Moushey says there were various people responsible for what allegedly occurred. He includes former Penn State athletic director Tim Curley and senior vice president of finance and business Gary Schultz, among others, who were noted in Game Over, as being culpable to some extent:

“There were many people with dirty hands in this whole thing. Joe Paterno happened to be one of them, but he’s also the brand name of the university so he probably, he got more than anybody else as far as the negative commentary, but the bottom line in that situation when you read our book you see that he could have done more, he said that himself and you know that’s the way history’s going to treat him.

As far as the other people, [Tim] Curley, [Gary] Schultz, Schultz seems like he’s getting more rap than most people because he was involved in the 98 event and the 2002 event. Both Paterno and Curley say they had no knowledge of the 98 event which many people that we interviewed found that to be highly questionable. But the Paterno family continues to insist that Joe Paterno had no knowledge of the 98 event. And the fact of the matter is that shows this culture of insularity where people repeatedly saw things, repeatedly learned of things and repeatedly failed to do anything about it.”

“Joe Paterno was the biggest man on a very big campus. He was paid more than the university president. He called shots up there. He told people that he would step down when it was his call and what he thought was best for the university. I think when you look at it in total he’s certainly not maybe the central figure in this, but what happened to him and to get fired, he tried to resign and then get fired the way he did over the phone late at night, can you ask yourself did he deserve to be treated that way? The short answer is no, but did those ten young men deserve what happened to them at the same time?”

It has been reported that Joe Paterno was informed by Mike McQueary that McQueary had witnessed inappropriate behavior between an underage boy and Jerry Sandusky, in the Penn State showers in 2002. Reportedly, Joe Paterno then took the claims of Mr. McQueary to his superiors. Some people have said that Joe Paterno should have done more after hearing of that kind of behavior. In an interview after the events, Coach Paterno said he should have done more. What should he have done? Moushey explains:

“Joe could’ve seen what was happening and put his foot down and said we’ve got to make this stop, we’ve gotta vet it, we’ve gotta prosecute it if it need be etc., etc. and then in 2002 any of the allegations would’ve ended.”

“If he puts his foot down, there’s gonna be some, the university, the football program, which is squeaky clean is gonna be tarnished at least temporarily, but don’t you think in the long run if he takes the stand and says, ‘I cannot allow anything that threatens children to happen under my watch.’ He maybe would’ve been a more horrific figure if he had done that. You know you meet a legal obligation in reporting it to your superiors, but why report it to your superiors? Why not go to the police and say, ‘I’ve just been told that a long time assistant of mine, who’s no longer on staff by the way, was engaged in this kind of, but on campus property in the showers of the Penn State football program.’ You know if he stops it there and he has the power to stop it, it’s a different outcome altogether.”

“If I saw something like that, I really wouldn’t want to be around the guy even if I decided to keep my mouth shut. But we also talked to a bunch of people that said that McQueary did not keep his mouth shut to his friends and others and in fact that’s how a state police investigator found McQueary because one of his buddies blogged a statement that McQueary knew, an assistant knew about this stuff.”

“Mind boggling and mystifying isn’t it Chris that he would witness something like that and still somehow be associated with Sandusky, playing in his charity golf event and playing in these charity football games. But I think what you take away from Game Over is how isolated Penn State is…When McQueary was told by his superiors that this is what they did, they banned Sandusky from bringing young boys on campus and are you ok with this punishment? And he said, ‘Yeah. I’m ok with it.’ Then life just picked up back to normal for so many people as if they just swept it under the rug. And one of the things that hurts so much here is you have this witness seeing this happen to, you have that image of a 10 year old boy with his hands against the shower wall, yet nobody in that entire university bothered to find out who that young man was and hear his version of events, inexplicable.”

Mr. Dvorchak notes that there is now a new era of transparency at Penn State and that if someone witnesses something they should not fear reporting it:

“The new administration has promised a new era of transparency and part of that is to encourage people to say if they see something wrong or untowards to report it without fear of reprisal. Keep in mind, Penn State in Centre Country is the largest employer up there. I mean people’s livelihoods are tied to that university and I think there’s a tendency on everyone’s part to protect your own self rather than do the right thing and protect the lives of children. These children, these kids are from underprivileged backgrounds, single parent households. They’re basically invisible.”

Finally, Bill Moushey gives his thoughts on the upcoming trial of Jerry Sandusky and what he believes will happen:

“There’s a mountain of evidence that even Sandusky’s lawyer before the gag order said, ‘That he feels like he’s climbing Mount Everest.’ And that he’s gonna have to methodically go through every one of these stories and break them down. The only thing that looks like that’s going to his advantage is that a lot of the accusers stories are not time and date specific because they were young kids when it happened and they’re talking about things that happened you know as long as 10, 12 years ago. So that’s where they’re gonna focus. If Sandusky’s convicted of any of the assortment of charges, especially the felonies, he’s 68 years old and he is going to face a long sentence under any of those circumstances.”

You can purchase a copy of Game Over: Jerry Sandusky, Penn State, and the Culture of Silence here

You can email Chris Yandek at Ch[email protected] Chris is available for interviews to comment on anything featured on CYInterview.