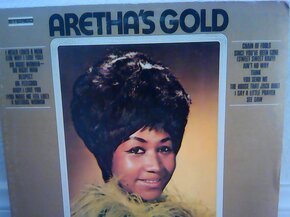 After being delayed, Respect, the Aretha Franklin biopic on the late Queen of Soul will be released in movie theaters nationwide, this coming Friday, August 13th. Academy Award winning actress and singer Jennifer Hudson will play Ms. Franklin. The movie is sure to bring renewed interest to Aretha’s music.

For those who are not familiar with the music legend’s body of work, a good starting point would be her 1969 album Aretha’s Gold. Many of her hits are on it including Respect, A Natural Woman and I Say A Little Prayer.

The album was originally released on vinyl. Years later, it was released on cassette tape and CD.

After listening to Aretha’s Gold, you will understand why Aretha Franklin earned the nickname the Queen of Soul. This record is full of soul, spirit and power.

Below you can see our photograph with Ms. Franklin, at The Blacks’ Annual Gala in Miami Beach in 2014. You can read the report of the night we met her here.