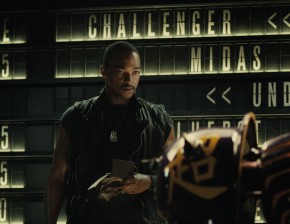 As he joked with me before our CYInterview began, Anthony Mackie spoke of our first interview, five years ago, and noted he, “Broke me into the business.” How so you might ask. Those who have been long time followers of CYInterview might remember that Mr. Mackie was the first Hollywood actor I conversed with, back in August 2006 [see here]. Now, half a decade later, many actors have been CYInterviewed [see here].

In the five years since Mr. Mackie and I spoke, he’s been in many movies including the 2010 Oscar winner The Hurt Locker. 62 months later, to be exact, Anthony’s back to discuss numerous topics including how his career pace has quickened. You can read the highlights or listen to the entire CYInterview below.

Anthony Mackie is currently in the number one box office movie Real Steel alongside Hugh Jackman. The film has held this position for the last two weeks. This is the second number one movie for Mackie. He played alongside Eminem in the 2002 flick, 8 Mile. He reflects on what he’s taken away from the Real Steel project and what working with Hugh Jackman is like.

“The great thing about Real Steel and working on it was just the humility that came along with working with Hugh Jackman. It was a great opportunity and everybody on that movie knew that we were there to make something fun and something that everybody would be able to enjoy. So everybody just took it easy and really just gave 100 percent for it. So it was just the ease of work man. There was no stress or pressure making that movie at all…He’s [Hugh Jackman] actually one of those guys who has no ego or you know, just no ridiculousness when it comes to his work. It’s all about him doing the work and turning out a good project. So it was actually really reassuring and relaxing onset and he’s just a really nice guy.”

From bullying boxer Shawrelle Berry, in the Oscar winning movie Million Dollar Baby, to playing a boxing promoter in Real Steel, Mr. Mackie agrees the only part of his boxing/acting resume missing is the boxing trainer or corner man – think Paulie, played by Burt Young [see interview here] in the Rocky franchise.

“Exactly, I, the thing now I just have to figure out how to be the guy in the corner coming out the fight, but you know, it’s always cool to do a boxing movie because I’m such a big fan.”

Whether it was his Broadway role, last year, in A Behanding in Spokane, a recent independent movie role that received buzz in Night Catches Us or being a soldier in Iraq in The Hurt Locker, it seems Anthony is doing it all. He explains how he has been able to work so well in various genres.

“The big thing is I feel is just approach every project the same way, but with a different mindset will really give you the opportunity to you know, develop different characters in the same way. I think it’s very important that you develop a character from yourself out instead of out in…I always like to discover those things within the rehearsal, within the scenes. So I always just try to let it come naturally as much as I can.”

In speaking recently with actress and singer Naturi Naughton [see here], we discussed in detail the limited roles for black actresses. Arguably, the same goes for black actors. There are, however, less headlines and discussions about it. When it comes to Anthony Mackie, though, finding work is not a problem. He explains how he’s been so successful:

“I think acting is like investing. You really want to diversity your portfolio. The biggest thing for me is just having my name mentioned with certain names…When reading a project, you can always tell if the project is gonna be good or even great for that matter for the people who are associated with it…When I got out of Juilliard, I got great representation and one thing my agent, who’s now my manager at the time said when I started in the business was, ‘This business shouldn’t limit you or judge you because of your race. You should be seen for every part that you’re in the right age range for.’

And that’s something we worked towards for the last 10 years…When people see you do theater as well as independent film, as well as major films, hip hop as well as Shakespeare, it’s not so much that they can’t say they won’t cast you because you can’t do it.”

Every actor has a dream project and Mackie is no exception. He has been developing a screenplay for a movie based on the life of Olympic icon and track runner Jesse Owens.

“My dream project, that I would like to do, is Jesse Owens. I feel like it’s one of those movies, it’s a movie that deserves to be made and it’s a story that needs to be told. I feel like if you look at what happened at the Olympics in 1936, Jesse Owens saved the world.”

In recent months, Anthony opened a bar in Brooklyn, titled NoBar. Being from New Orleans, Mr. Mackie is bringing a unique style to Brooklyn. He was very hands on in building the décor for his new business. He talks about the experience:

3 Replies to “Anthony Mackie: Alongside Hugh Jackman in Real Steel, This Actor on the Rise is One to Watch”