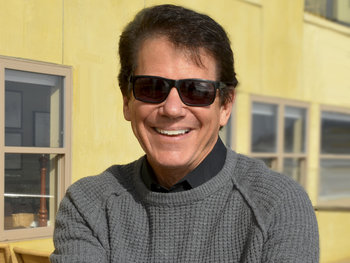 Being a cast member of the 1970s hit television show Happy Days, Anson Williams made a name for himself playing the ever likeable Warren “Potise” Webber. Beyond being on that iconic show, from its beginning to its end, Anson has had a successful career as a TV director. He has directed episodes of popular TV shows including Beverly Hills 90210 and Melrose Place. Mr. Williams has also been an entrepreneur.

Anson is currently promoting something he created, with input from his now deceased, famous cousin, Dr. Henry Heimlich. Dr. Heimlich, of course, is most well-known for creating the Heimlich maneuver, the technique which can help save people who are choking.

Anson’s new product is meant to address drowsy driving. Driving while feeling drowsy can lead to falling asleep at the wheel of a car, something that, frighteningly, he says he has experienced. With the help of Dr. Heimlich, Anson has produced what he says is an all-natural, citrus infused spray called Alert Drops. The actor/director claims Alert Drops will help a person stay awake. You can find more information about his product at www.alertdrops.com.

Additionally, Mr. Williams, after having been diagnosed with colon cancer late last year, is happy to be cancer free he says. Having beaten cancer, he had the opportunity to appear on ABC’s Battle of the Network Stars, in which mixed martial arts star and former UFC Champ Ronda Rousey was his coach.

Featured columnist Jay Bildstein joins us for this interesting discussion with the actor, director and entrepreneur.

“We spent two years developing Alert Drops. No caffeine. No stimulants. No nothing. It’s lemon in a spray with the right amount of citric acid, the right amount of water, the right amount of sour lemon and we’ve already saved lives. Just in the subject groups alone, we’ve saved so many lives. It’s an amazing product and in this day and age of like craziness in this country where everything seems out of control, we can do something positive.”

SPECIAL NOTE: CYInterview would like to emphasize that a person who is sleepy should never get behind the wheel of a car. Additionally, CYInterview has no experience with the above mentioned product and does not take a position as to its value and effectiveness.

Discussing his time on Happy Days with Ron Howard, Henry Winkler and Don Most among other stars, Mr. Williams says it was more than an acting job. He says Gary Marshall gave him the opportunity to learn the art of directing. Anson would go on to direct episodes of numerous TV shows:

“Gary Marshall was very instrumental in terms of broadening our minds and opened up the door to see other opportunities. So Happy Days became much more than just acting on a show. He saw the entrepreneurial spirit in me and really inspired me to go in the business and create products and things like that. … He opened up the Paramount lot and I was able to observe and stand right by the best directors in the world. … When they were shooting all the musical numbers for Grease, you know, on the lot, I was there watching how they did it. So that was my education as a director. And that’s Gary Marshall.”

Discussing his appearance on ABC’s Battle of the Network Stars, he says his coach for the show was none other than UFC star Ronda Rousey. [You can see our recent CYInterview with the director/producer of the upcoming Ronda Rousey documentary Gary Stretch here] Anson had this to say about the MMA fighter:

“It’s so funny. Ronda Rousey was our coach. And she is such a doll. She was such a delight to spend the day with. What a wonderful person, really good hearted, talented, great, great person.”

Finally, Anson Williams recently had a battle with colon cancer. Now, cancer free, he tells us what he wants everyone to know about colon cancer:

“I can’t stress enough how important it is for everyone out there to get colonoscopies, so important, so important, because it’s the, colon cancer has grown 60 percent since 1990. And a lot of it has to do with the foods we’re eating, there’s so much processed stuff. And I don’t want to tell people not to eat meat or whatever, but there’s things you should definitely stay away from.”

Find out more information about Anson Williams and Alert Drops at www.alertdrops.com