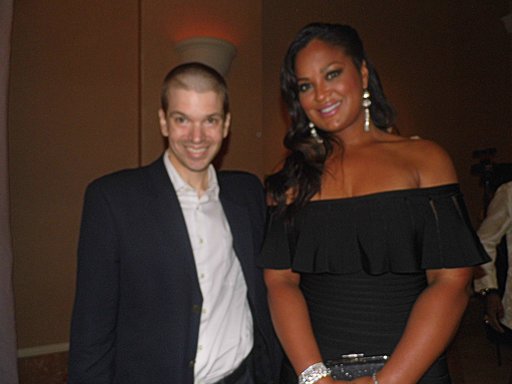 Every inductee had a video of their career highlights shown, prior to speaking.

When it came time for Laila Ali to speak, the retired boxer and daughter of Muhammad Ali reflected on how she, the youngest child of The Greatest, found her own way into boxing. See our photo with Laila above, from the event.

Ms. Ali told the crowd that she was watching Christy Martin fight on television and thought boxing could become an avenue for her as well. Laila says she was interested in pursuing boxing for herself and not because of her famous father. At the outset, Muhammad Ali was against the idea. He did not believe boxing was for women.

After Laila had success, Muhammad Ali changed his opinion and said that women could be fighters, just like men. Ms. Ali’s career record ended up being 24-0. Why did she retire? She claims she ran out of people to fight. Those she wanted to have bouts with were not interested, she said. The former women’s super middleweight and light heavyweight champion thanked everyone including her mother Veronica Porsche and her husband Curtis Conway who were both in attendance, as well as her past boxing trainers and the entire boxing community.

Other highlights from this year’s Hall of Fame induction class included Shane Mosley proposing to his girlfriend on stage after his speech. There was also an enthusiastic and hilarious speech from former two time world heavyweight champion Chris Byrd, who was inducted by past CYInterview guest, the former undisputed heavyweight champion of the world, Evander Holyfield [see here].

Former United States Senator Harry Reid sent along a video message to the crowd about his love for the sport. He revealed that owing to doctor’s orders, he could not make this year’s ceremony and planned to be at the 2019 edition of the Nevada Boxing Hall of Fame. Earnie Shavers reflected on how he ended up in the sport of boxing. And boxing executive Todd duBoef told the crowd what it was like to be in a room with mega boxing promoters Bob Arum and Don King [see past CYInterview here] at the same time. He added that he saw a positive future for the sport.

The annual Nevada Boxing Hall of Fame induction ceremony brings together many of the biggest names from the sweet science. We look forward to next year’s ceremony.

You can find more information out about the Nevada Boxing Hall of Fame clicking here.