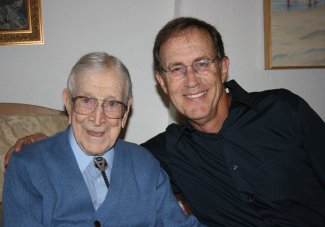 As college basketball season tipped off this week, a deep loss resounded. John Wooden – 10 national titles in a 12-year span at UCLA and over 600 wins – died this past June 4th, at the age of 99.

One of Wooden’s former players, Andy Hill, spoke with me earlier this year prior to the passing of the legend. Hill is one of only13 players in the history of college basketball to have won three consecutive national titles during his time at UCLA. His life, after college, propelled forward by hard work, led him to the top of the media realm as president of CBS Productions from 1991 to 1996.

Today, Hill has partnered with a former college basketball player Tom Bartow – who has spent his career in financial services working for Edward Jones and the American Funds – to create a coaching newsletter titled Hollywood and Catfish. The newsletter’s intention is to give anyone an extra push to accomplish what they want to in their professional life, using the tools of coaching. Hill explained as we started our conversation:

“For most of us in life, when we get out of college or no longer are competing in athletics, that’s the last opportunity we’ve really had in life to have a coach and what we all know is that game of life doesn’t get easier. It just gets tougher and particularly when you’re engaged in a professional context where you’re always hoping to get that kind of coaching within your corporate structure, but having spent my life in the business world, I know that you can go your whole life hoping to have it and it never happens.”

Given the current state of the economy, with many Americans feeling they’ve been led financially astray, perhaps if more individuals had been properly coached for the rigors of life it would have alleviated some of the challenges we are now confronted with. Speaking with me, Hill shared one of many lessons from Coach Wooden, something all Americans can relate to. The past can’t be undone, but we can do our best to write a better future.

“What coach would say is we shouldn’t look backwards you know, we should look forwards, but there’s always something to be learned if you don’t get overly focused on where we’ve come from. When coach graduated from grade school his daddy gave him a little card on it and it had a list of threes. One of them was don’t whine, don’t complain and don’t make excuses… The other list of three that he got from his dad was don’t lie, don’t cheat and don’t steal. Now what we all know is that if the people on Wall Street didn’t lie, cheat and steal we’d all be in a better spot today if these people didn’t take crazy risk with someone else’s money we wouldn’t be where we are today… John Wooden to me represents the best of what America is – hard work, integrity, caring, accountable leadership and if we all had more of that, there is no doubt in my mind that far too many of people who are in our middle class who now can’t seem to find a gig and are unemployed and looking around would still be working because we would’ve managed our future better and we would’ve been much more conservative in how we approach growing our businesses as opposed to acting like money is, that we’re all in Les Vegas playing some high stakes poker game.”

As fondly as he spoke about his relationship with Coach Wooden, Hill says there were 25 years after UCLA when he didn’t speak to the “Wizard of Westwood.” Yet, Wooden’s messages stuck with him, all those years, through his professional success.

“I graduated, Chris, in 1972 and I was very unhappy with not playing. Now, I’d been on a legendary team. This all seems crazy to me now that I was that unhappy that I didn’t talk to my coach, but the fact is I wanted to play and I sat there for three years. We went 87-3. Not a lot of chances for me to go in and say, ‘Coach, put me in.’… I didn’t see him for a long, long time and I can’t get that time back Chris, but I also know that the day that I picked that phone up and called John Wooden to say, ‘Thank you for my teaching me everything I needed to know about leadership, to succeed in the real world.’ Honestly Chris, I was calling just to say thank you. I didn’t think I’d ever meet him after that. I didn’t know that it would lead to this wonderful relationship we have today.”

What Hill enjoys most is telling stories that change people’s lives for the better. That’s what led him to what he’s doing today on www.hollywoodandcatfish.com. Andy recalls a letter he got during his time at CBS, when a girl changed her professional goals after watching an episode of Dr. Quinn: Medicine Woman.

“It was a letter from a young girl who actually down in Florida saying to me, ‘I saw Dr. Quinn last night and I wanted to know that I always wanted to be a nurse, but after watching Dr. Quinn I want to go to medical school and be a doctor.’ Wow! That blew my mind. You watch an episode of TV and it change your life and it really is what put me on this path of telling my story as opposed to other people’s stories because what I know is I had a unique relationship with the greatest coach ever.”

Hill can claim one of the greatest feats in television history. For this, he could be considered one of the best TV executives in history. With Touched by an Angel, Doctor Quinn: Medicine Woman and Walker Texas Ranger, he put together the only lineup in the history of television that was number one during all six half hours of primetime television programming.

“It was the first time in the history of broadcast television that one studio had programmed all six half hours on a network and not just programmed all six half hours, but won all six half hours and that was Andy Hill and CBS Productions, which was a very small operation. I had about seven direct reports competing against Universal and Warner Bros and 20th Century Fox and these big studios that had 250, 300 people doing what I was doing with seven. So on one hand you’d kind of say well, that’s impossible. How could seven people do what 250 or 300 people had never done before and I’d say it’s about as impossible as winning 10 championships in 12 years, but the connective tissue is coach’s philosophy of leadership of how you take a group, you get them to work as a unit.”

Reality TV shows are popping up more often than scripted dramas these days. The main reason is smaller financial risk for the networks. It’s easy to get a group of everyday people together and stick them in the Big Brother house. Hill offers nothing positive about reality television, saying it has become the crack cocaine of the networks – something worthy of being thrown in the wastebasket.

“To me reality television has become the crack/cocaine of network TV and has really, really made network television less than it could and it should be…Unfortunately to me they’ve become kind of a hot house for antisocial behavior that does nothing but give people a completely warped idea of reality…The trouble is the audience now is on steroids. They think reality television is real and people act crazy…Now real isn’t good enough. It has to be real on steroids and the real on steroids has led to this absolute glut of trash on television. I don’t know what other word to use for it. It’s trash. It’s garbage. Unfortunately, so many of our young people find this type of trash and garbage really appealing.”

The news divisions at the major networks have taken a turn similar to reality programs, focusing on the bottom line and seemingly ignoring quality. With massive layoffs at both ABC and CBS News this year, Hill reflects on how the news divisions – which used to be a public service – focus on ratings.

“I don’t really think that Walter Cronkite looked at the ratings every day when he woke up, but I can promise you Katie Couric does and I don’t really think Bill Paley when he was running CBS was looking at Walter Cronkite’s ratings every day, but I can promise you Les Moonves is looking at Katie Couric’s. That’s not Les’s fault. That’s what the business has become. It’s all about business and things have changed so drastically that we’re not now being as well served as we probably should be by the networks that are out there that are simply looking to aggregate eyeballs at any cost aggregate eyeballs and you know we also have this obsession with getting younger eyeballs as opposed to older eyeballs.”

With the recent passing of John Wooden, it is unlikely we will ever see another coach come along and duplicate his philosophy for winning in life and on the court. Andy Hill continues to spread the lessons of Coach Wooden through his Hollywood and Catfish newsletter. Additionally, he takes any opportunity he has to spread the message in numerous public forums. So, perhaps it’s best to think about what Andy Hill says is the most important message Coach Wooden ever taught him?

You can learn more about the newsletter Hollywood and Catfish at http://www.hollywoodandcatfish.com.

2 Replies to “Andy Hill: Motivation’s B-Ball King of the Hill”