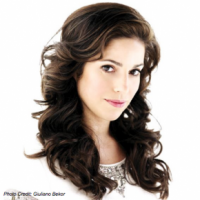 It’s been an amazing last few years for Ana Ortiz. The older sister of fellow actress America Ferrera’s character Betty on the hit ABC show Ugly Betty has won an Alma Award as a best supporting actress, gotten married, and is looking forward to starting a family. She was under the weather when I spoke to her a few weeks ago, but her enthusiasm came through that after many years in different projects she has finally found her place.

Listen to the Ana Ortiz CYInterview:

Chris Yandek: Did you ever believe this is where you would be right now?

Ana Ortiz: “I think I did only because I don’t know what else kept me going. I think there was always a belief that something wonderful like this would happen. I am also thankful for this particular show. It’s like I am pinching myself really this is my job? This is my job? I think the only way to get through as an actress or artist of any kind is that you ultimately believe that somewhere somehow it’s going to happen for you.”

CY: How is married life going?

AO: “Married life is amazing. It’s better than I could have ever imagined. It was definitely a heck of a year. It was unbelievable.”

CY: What is the key to balancing it all out and making it work?

AO: “Such a good question, I think I am still figuring that out. I think it’s hard to manage your time although I have to say the writer’s strike was painful and miserable on one hand, but on the other hand for me being a newlywed that was one good aspect of it as I got to hang out with my man and we just got to be married for a little while without all the craziness of schedules and stuff like that. I am still trying to figure it out, how to manage it all. It’s pretty great I have to say. Everybody on the show – we’ve really turned into a little family. It’s nice to have the support of people on the show, the cast, and Tony Plana is a big help cause he’s been through this a million times.”

CY: What else did you do during the writer’s strike?

AO: “Well, I got to go home for a little while. I am from New York so I got to go and spend some time with my mom and my family. We’ve been sort of fixing up our house and I got to go to fashion week for the first time, which was incredibly exciting in New York. Being a native New Yorker and never having been to the fashion shows was a big thrill for me. Other than that just sort of flexing out a little.”

CY: According to reports, ABC will resume new episodes of Ugly Betty starting April 24th. Can you give us a little sneak peak of what we’ll see back in April?

AO: “I think what we’re going to be doing is sort of tying up this whole season. I think it’s just gonna be tying up the stories that we started and I think something is going to come to a head with Henry and Betty and I think in terms of my character concerned, I think they’ll start opening up the salon and seeing how that crazy cast of characters is going to work. Basically we’re going to be tying everything up from this season so we can start fresh for season three of a whole bunch of different wildness.”

CY: What does it mean to you to go to work with this diverse cast of women and people every day?

AO: “It’s incredible. It’s like the most supportive environment that you can be in. It’s run by these incredibly strong women, and Latinos, and we always worry we come off sounding so pollyannaish, oh we get along, but we really hang out. My husband and America’s boyfriend play poker nights. Ashley Jensen and I always go out, the two of us and have little outings. Little Mark has a house warming party that all of us are going to and Vanessa Williams was missing everybody and feeling homesick and she threw us a great dinner party a week before the SAG awards. It’s just so cool to know we’re all in this and even though there is these two separate worlds in the show, offset we all hang out. We’re all like this little crazy family.”

CY: In the real world, do you see America Ferrera as your younger sister or do you two feel you have that relationship going on?

AO: “It’s so funny, sometimes. To be perfectly honest, half the time she is giving me advice. She sort of takes the role as the big sister. It’s so funny. We definitely have that relationship. We definitely have a sisterly relationship. I don’t know that it’s necessary one of us being the big sister little sister thing because that with us is always sort of morphing from the conversation or the day or the week. We definitely have a sisterly vibe. It’s a comfort level that only comes that I remember that the first time we shot in the pilot, we’re in New York when I first met her and is like oh my God! You look like my sister. Keep in mind she’s a professional sister. She’s got five siblings. She’s got the whole sister thing down. “

CY: There has been a lot of discussion that Lindsay Lohan might be joining the show for a role. What is the update on that?

AO: “I think it’s still up in the air. I know the storyline they were planning on using is probably not going to happen. I don’t know if they’re sort of going to change the storylines that they put her in. I have no idea, but yeah we’re sort of all in the dark about that. She was actually going to be hanging out with the Queens crew cause when they do the stunt casting all the celebrities have been going Mode. So we were actually excited to get one of the celebrities to actually come to Queens and Lindsay was going to be that girl. I am not sure how it’s going to work out.”

CY: Are you going to join fellow Hispanic actresses in Jennifer Lopez and your co-worker Selma Hayek in this Hollywood baby boom period we’re in?

AO: “Definitely! I definitely want to start a family. It’s definitely on our radar. I feel like I have the blessing of everyone. America has been trying to get me pregnant for like – she’s like oh get pregnant, get pregnant since I’m married which is adorable. It’s a great support and a lot of actresses worry they’re gonna fire me and it’s gonna be the end of my career, but I am really fortunate to sort of be supported, but my character is already a single mom. Helda is in a bit of a mess so anything can happen.”

CY: Your father was the first Puerto Rican city councilman of Philadelphia. What did it mean to you at the time?

AO: “You know it meant just sort of achievement. It meant a real sense of pride not only in being Puerto Rican, but in my family and also just sort of something that my dad came from nothing, putting himself through school, and it was just a sense of anything is possible for us. Anything with hard work and I did see how hard he worked. It’s just a sense of civic duty. You know what I mean? You have a responsibility to do something with your life and to stand for something and to make your opinion heard whatever that is. I am really blessed for the family I have.”

CY: So when we look at your father, what do you think of the 2008 election cycle and two firsts on the Democratic side? I know where America stands on this.

AO: “I am so excited. I think this is one of the most exciting elections and it’s just thrilling. It’s funny because America is so passionate. I was an Obama girl and then I talked to America and I am like ok Hillary…Hillary. The wonderful thing about this is that it’s like I swear I can’t decide. I am constantly going back and forth between the two of them. For me it’s a real win…win. I just want to make sure no matter what happens that everybody gets out and votes. Obviously I am a Democrat and I hope to not offend anybody, but we just can’t afford to have another Republican in the White House.”

CY: Finally, tell me something about yourself that nobody else knows or you haven’t told any other member of the media?

AO: “Interesting! I am like an open book Chris. Something that I haven’t talked about a lot, well I am half Irish. My mother is an Irish woman. Nobody really knows that about me. I think people just assume I am 100 percent Boricua, but nobody ever asks.”