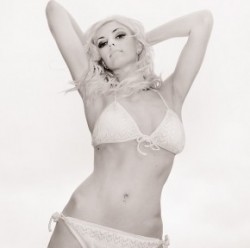 Alison Beaulieu is probably not someone you’re familiar with. She’s a model. But you won’t find her plastered on billboards in major cities or in Victoria’s Secret ads – at least not yet. Major league modeling is a tough racket to break into.

Though Alison is only enjoying modest fame so far, her story is one of great inspiration and purpose. She studies mental health/addiction counseling and works hands on with adolescents. And this Canadian blonde bombshell deals with plenty of challenges. One of which some people might mistakenly yearn for. Ms. Beaulieu has trouble keeping weight on.

“I’m probably not your typical model. I deal with a lot of stress in my job and my life, so I actually have a metabolism problem, so it’s very hard for me to keep on weight. So I’m probably the person that eats whatever I want and as much as I want for curves and stuff like that…I’m very into child psychology, natural ways to deal with autism and ADHD, not the pharmaceutical commission’s drugs, that kind of thing. I deal a lot with of adolescent’s addictions and counseling as well as mental illness. So definitely a different road than most of the models I meet…I do a lot of crisis intervention, that kind of thing. My university degree, psychology. I’m actually looking to go back to school to do my social work.”

In working to make a difference through her daily life, Alison is candid when speaking about her own challenges. For example, she has scoliosis; her spine is curved from side to side. Ms. Beaulieu admits it’s something she has tried to hide. On top of that, she’s tall. Tall is ideal for a model, right? But she reached her adult height in sixth grade:

“I actually never really grew up thinking I wanted to be a model. I was very much a tomboy, didn’t really have time for that kind of stuff or makeup and having my hair done…In grade nine I was actually diagnosed with chronic back pain. I suffer from scoliosis. I hide it really well…I have to go to appointments a lot and stuff like that. So I never when I was going to appointments three times a week thought oh, I’ll model…

I guess I should probably say I’ve also been this tall since grade six. So it’s been between 5’9 1/2, 5’10. So I’ve had a little bit of a complex about it growing up. I’m all legs…I actually looked at is as a means for another part time job while I was going to school to help pay for university and actually just kind of helped confidence and stuff like that. So I still have a bit of a complex about my height, but it’s kind of actually helped me in that sense.” 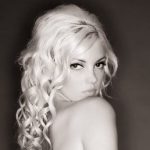 Alison began modeling at 22. She’s 25 now. She says you shouldn’t put an age on starting a modeling career, even if some in the media say otherwise. The brainy blonde’s ambitions include becoming a child psychologist or being part of an adolescent addiction counseling program.

“They’ll say it’s late to model at 26, 27, but I think people should just go for whatever feels comfortable for them. You know what I mean? Don’t put an age, don’t put a weight on it. Just do what feels right for you and is in your comfort level…Ideally I would like to be a child psychologist or in an adolescent addictions counseling program, something like that. I mean I’ll definitely do modeling as long as I can…I’ll meet the most random people at modeling events and it can help with my career as well. So it’s kind of vice versa.”

Ms. Beaulieu’s first love is animals. For a year, Alison volunteered with an organization that rehabilitates sick ones. After rehab, the animals are released back into the wild. Having a fear of blood, she thought it would be a great chance for her to overcome that phobia.

“My first love is animals. Growing up, it was nothing to have like 25 to 20 pets in my house. My mom when she met my step dad, he had a big heart for animals as well…Unfortunately I have a huge phobia for blood. I can’t look at blood…I thought that I would try to see if I could get past that…I volunteered there for just over a year and just worked with a bunch of different animals, anywhere from like a ferret to prairie dogs to like a three legged foxes and little raccoons and stuff like that…We would take an animals from people that found animals on the road, that kind of thing. They would bring them to the rehabilitational center, we would rehabilitate them and put them back out into the wild.”

The Canadian native noted she gets stereotyped as the beautiful blonde. She works to counter that when not modeling. She also understands the importance of self-respect, which goes well beyond surface beauty:

“I appreciate like when people can see that because I get that stereotype so much. In the nonprofit jobs that I do, obviously I go in with my glasses, my hair in a bun, a blazer, I’m very sweat pants, Lulu*s, hair wrap every day type of thing. So it’s fun for me when I go to a shoot and stuff like that to kind of get dressed up, but I heard a really great quote the other day that ‘Nobody is as ugly as their driver’s license photo and no one is as pretty as their profile picture.’ So it’s the same kind of thing right?

You see somebody in a magazine or even on Facebook or something, there’s so many different editing sites and no one really looks like that. You know what I mean? So at the end of the day you have to be able to go home and look at yourself in the mirror and respect who you actually are as a person because like you said, people try and do anything they can just for the modeling image and people don’t understand really what the industry’s about. There’s some really positive. There’s some really negative. But kind of like I said before, you just gotta do what’s right for you and you’ll excel at that.”

The photos used for this piece are credited to Doug Windsor Photography.