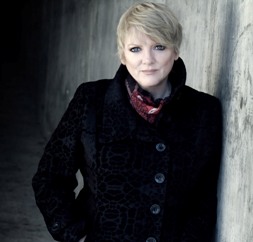 In the 1970s, one of the popular television shows in the United States was Little House on the Prairie. One of the characters in the show was Nellie Oleson, played by actress Alison Arngrim. Today, the now veteran entertainer has a one woman show titled Confessions of a Prarie Bitch. This past weekend, she had two performances of the show at the Laurie Beechman Theatre in New York.

In the acting world, Ms. Arngrim has teamed up with frequent CYInterview guest Mason Reese, to produce a pilot for the sitcom, Life Interrupted, which will hopefully be picked up. You can see the pilot, broken down into 5 minute segments, on YouTube. In Life Interrupted, Ms. Arngrim plays the ex-wife of Mason’s eponymous character. Her role in the series is up for Emmy nomination consideration, in the Best Actress in Short Form Comedy category.

Away from show business, Alison is an advocate for child protection. She is a spokesperson for the The National Association to Protect Children. Recently she spoke in front of the California Assembly Budget Committee regarding a possible cut to the Internet Crimes Against Children Task Force.

Hearing Alison Arngrim speak will make you laugh and feel inspired at the same time. She is full of positivity and has a can do attitude.

You can read the highlights and listen to her entire CYInterview below:

Alison comes from a family with show business ties. Her father worked for Liberace in Los Angeles. On what it was like to live in a home in Los Angeles, down the street from Liberace, she says this:

“He [my dad] was sort of the L.A. person assigned to Liberace. And we actually rented a house in the Hollywood Hills around the corner from Liberace so my father could be on call. And this, of course, meant I got to go see Liberace’s shows when I was a child because you always want to take the eight year old to Liberace. And actually I met him, he’s wonderful, but my parents really did tell me when we went to the show, ‘Don’t say anything because no one must know that Liberace is gay.’ I said, ‘I’m sorry. I’m eight. I know he’s gay.’”

Known for her role as Nellie Oleson on the iconic TV show Little House on the Prairie, she says this about the show today:

“They tapped into the psyche of millions of women of a certain age. And it’s carried on like that and it has become part of a fabric of our culture and part of that and part of our language and things we talk about where we reference Little House [on the Prairie]. But bizarrely, it is now part of the French culture. People in France now have expressions and things they say that are because of Little House on the Prairie.”

Over the last two years, 1970s star Mason Reese has been talking with us about his now YouTube series Life Interrupted, featuring Alison Arngrim. With her now being considered for an Emmy Nomination in the Best Actress in the Short Form Comedy category, she tells us about how the project came to be:

“I had met Mason several years ago in New York. I was doing my show at The Cutting Room. And I ran into Mason, he was coming to another event and I was like, ‘Oh my God, you’re Mason Reese.’ And we talked and we exchanged numbers and hung out and then he came to L.A.. He was talking about doing a talk show and it was very fun. I remember saying to someone, ‘I have Mason Reese on speed dial on my phone, strangest thing.’ And then like about two years ago my friend Steve Wishnoff, the writer and actor, Mason and he had become friends.

And Mason said, ‘I think I want to do something. I haven’t done show business stuff in ages. I think I want to do something but I don’t know what it would be. I tried to think, what would it look like? Like a sitcom? Who would I play?’ And so Wishnoff starts saying, ‘What if it was sort of like you but not you? What if it was the messed up version of you?’ And they began kicking around ideas.”

Speaking about how to succeed in show business, the veteran actress gives us a great analysis, sharing that it is all about overcoming rejection:

“I have been in the Screen Actor’s Guild since I was five years old. I have been auditioning and working since I was a child. I was told rejection is normal. You’re gonna read for 100 parts before you get one. There’s things that aren’t gonna work out. With my dad and his clients, I saw people who, where the careers were going nowhere and then suddenly they had a big thing or they were a star and it wasn’t going anywhere. And you never knew. There was an element of chance. You did everything you could, but a lot of it sometimes you were in the right place at the right time. And there were elements you could not control and you could not take every single thing personally, you just couldn’t.”

She has performed her one woman show, Confessions of a Prairie Bitch, all across the United States. Ms. Arngrim says she would be open to the idea of doing a long run of her show at a Las Vegas venue:

“That, of course, would be fun because you get to do it every night and then you can just try out new things all the time. That would be very attractive.”

Check out the National Association to Protect Children at www.protect.org.

This coming Sunday May 21st, Alison will be part of the Dearly Departed tour in Los Angeles. You can find more information clicking here.