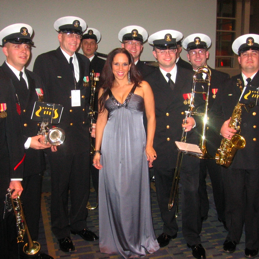 While many fans of Latin music know who Alexandra Taveras is, she’s not yet a household name. But she certainly has the tools to be. With her vocals and looks, she can go head to head with any star in music today. “Alex” has toured with Jennifer Lopez and Thalia. She currently tours with Mark Anthony. She’s charted number one, in a duet with salsa king Tito Nieves. And she’s ready to break out.

Listen to the Alexandra Taveras CYInterview:

Chris Yandek: You have one of those most unique voices I’ve ever heard. For those that aren’t familiar with your long career of many accomplishments in numerous areas, what would you like people to know about you?

Alexandra Taveras: “That I am a regular person. I don’t often think of myself as a celebrity. I am a regular mom, someone who has come from very little. I am by no means wealthy or at a status that I will eventually get to. I want people to know that I’m a regular person. A lot of people that come from the kind of background that I came from can definitely, if I’ve done it , come out of having nothing and growing up in a very poor neighborhood, anyone can do it.

That’s what I’d love for everyone to really believe. It’s something that’s kind of hard to believe when you grow up in inner city neighborhoods and you don’t think often that could be me. You kind of think that you’re stuck there and that’s the card you’ve been dealt, but no.”

CY: You have this amazing voice! When did you know you had this ability to sing?

AT: “Since I was very…very young I loved singing. I love listening to good singers and I enjoyed it. It wasn’t until I was in junior high school that I actually thought of making it possibly a career. I was in junior high school and you had to take chorus and the teacher overheard me. I was kind of timid, a little shy. She said, ‘Oh. Let me hear that again.’ She forced me to sing a solo. It was the most terrifying moment in my life up until that point.

She pushed me. She said, ‘Ok, now you need to audition for Laguardia High School Music and Art.’ I was like, no…no…no. I can’t do that. She said, ‘Well, if you don’t do it you will get a failing grade.’ So I always did what I was told. So I auditioned and I got into music and art and that’s when I started to open up the possibility. I was like wow! I would love to do this.

Growing up with a mom, who was a single mom raising four kids on her own in the Bronx she didn’t take to the idea. She was like, ‘What are you gonna do Alex? You gonna go into the grocery store and sing to them and they’re gonna hand you a bag of groceries?’ I was like, no mom, but I really want to.

For a while there I was contemplating majoring in something other than music, but when you get to your senior year your counselors look at your grades, your personality, what you’ve done so far in high school and they kinda guide you in the way you should go. That’s the way I went.”

CY: You saw some of the cultural relevance of Latin Music develop before your eyes in America and throughout the world. What are you most proud of through your entire career?

AT: “Wow! There have been so many proud moments for me. I’d hate to leave anyone out because of course now I’m under pressure to think of all the moments. Definitely I am very proud of the fact that I was able to work with some of the greats like Tito Puente. That was such an honor, such a privilege. I was able to sing on his album and he’s gone now and he’s a legend.

That to me to have been personally asked by him to sing on his album was one of the most proudest moments of my life. I’ve performed with Celia Cruz, again an amazing legend, amazing person. She was so unbelievable because she was this huge star and you would meet her and she was this such down to earth person. That was definitely a proud moment.

And Tito Nieves who I sang with, again, had the honor, privilege of singing a duet that became a hit in the charts. I don’t want to sound like I’m dropping names. I’ve been very…very blessed.”

CY: Do you feel like in some ways you’re one of the best kept secrets in Latin music?

CY: Looking back at The New York Band, which at one point was the number one Latin band, you guys toured the world. You had a huge following. How do you feel looking back on it that you dealt with all the attention, all the pressures from this huge following and what did you learn about yourself from that period?

AT: “Wow! That was a phenomenal time in my life. One thing I did learn early on is that you cannot shut yourself from doing different things. For instance, I had just graduated from the New England Conservatory where I majored in classical music. It was never my intention to become a huge opera diva. I wanted to do popular music. The New York Band was a merengue band, a Latin band that performed in clubs.

There were tons of clubs in that time, everywhere and you would work every weekend. At first I didn’t want to do it. I was like no…no. I come from a conservatory. I studied opera and I wouldn’t be caught dead singing in a merengue band in a club. They kept after me to do it, and to try it, and I did and man am I glad I did.

CY: Currently, you’re touring with Marc Anthony and are the only female performer on his stage. You’ve also toured with his wife Jennifer Lopez and of course Mexican sensation Thalía. What have you taken away from working with these major stars as you continue to move forward and develop you status as a solo artist?

AT: “I’ve learned a lot of things from all of them. You have to keep yourself grounded and not let things get to your head. It’s very easy to get swept in and be taken away. Family, I see that they are very family oriented people. Family is always the number one thing that will keep you grounded. The family is the one thing that will always be there for you in the good times and bad times. I am a testament to that.

My mom has always been there for me, my sisters, my siblings, they’ve all been there in good times and bad times. I’ve learned a lot about stage presence, performing wise. I’ve learned so many things.”

CY: You’re going to put an album out sometime this year and you’re working with high level producers in Jose Luis Pagan and Cory Rooney. What are you hoping to accomplish from this solo album?

AT: “I think the message is probably what every artist hopes to accomplish when doing a solo album. I want to show them me because when you’re yourself, you’re interpreting your passion, what you really mean. It always comes across and it always touches people. That’s what I want to have people relate to my songs. I think that when you’re true to your art, yourself, and your music that will come across.

That will always touch people whereas if you doing something you think people want to hear, that’s a different story. It may not come across the way you intended it to. That’s why I feel that if I’m singing something I truly believe in then they will touch people, things that I’m passionate about.”

CY: Again, what is the one thing that people should know about you as we continue to move forward? What are you hoping? You have this unbelievable voice, you have this unbelievable talent, you’ve been there. You’ve been there with all the major players on stage performing with them. You’ve had a chance to see them as individuals, but what are you hoping for yourself?

AT: “I am hoping people will see what my passions are, what really moves me. I want people to know that the same thing I can do they can do whether it’s with music, art, or finance or whatever it is you choose to do. If you follow your passion you follow your heart. You do what you truly believe in. You can do it and no matter what point in life you are at. I started a long…long time ago.

When you’re young you set goals and timeframes like by the age of 22 I will have already done this and that. It’s great to do that because it keeps you motivated. If things don’t happen at the time you want them to happen, it doesn’t mean they can’t happen because sometimes God has his own agenda and time schedule. I would say to people you follow your dream, your heart, your passion. That’s what I am all about. I am not gonna stop until I feel that I’ve given all I can to everyone that’s willing to listen.”

You can find out more about Alexandra Taveras and her music at her official My Space page below: