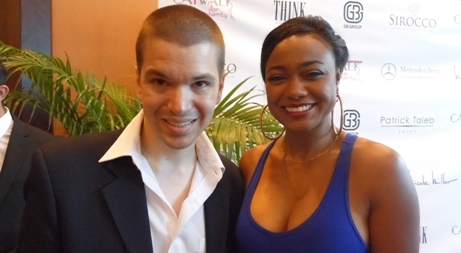 The stars came out for the annual Catwalk for Charity event this past weekend. The yearly get-together of the Haitian community Miami’s luminaries and other celebrities benefits the Breakfast with Santa Organization. The event raises money to support underprivileged children in Miami’s Little Haiti, neighboring communities in South Florida and Haiti as well.

One of the stars in attendance this year was actress, singer and past CYInterview guest Tatyana Ali [see here]. Many will recall Ms. Ali for her role as Ashley Banks on The Fresh Prince of Bel Air, among many other things. Ms. Ali, a Harvard graduate, has continued her trajectory in show business with various acting and music projects.

You can read the highlights and listen to our CYInterview below:

Telling us why she came to Miami for the Catwalk for Charity event, Ms. Ali told us this:

“I’m here to help raise money for Breakfast with Santa. It’s an amazing charity, an amazing cause. And I’ve heard about it through a lot of my friends and I wanted to see for myself and help to raise money.”

On her staying power in show business, Tatyana revealed:

In 2008, the actress/singer shared with us that she would love to do Dancing with the Stars [see here]. Six years later, Ms. Ali says she is still open to the possibility:

“I don’t know. I watch it. I’m a fan of the show. I think it’s really fun. … I was actually just talking about my, I’m gonna start working out. … I said I would start tomorrow. So yeah, I’m looking forward to that, but it would be a lot more fun to dance and do it.”