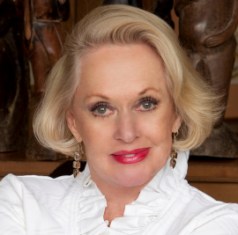 Last year, Tippi Hedren shared with the world the tale of her extraordinary life in her autobiography, Tippi: A Memoir. Now, in an over 40 minute conversation, the actress talks Hitchcock, working with actor Sean Connery in the film Marnie, her daughter, actress Melanie Griffith and her lifelong desire to protect animals, among other topics.

When we think of Alfred Hitchcock movies, the beautiful blonde actress Tippi Hedren immediately jumps to mind. Known for her roles in The Birds and Marnie, Ms. Hedren still keeps busy today, at 87 years old.

The Hollywood legend continues her work with animals. She resides with them at her foundation, Shambala, in California. Those animals include tigers and lions, among other wild animals.

Featured columnist Jay Bildstein joins us for this segment.

In her book Tippi: A Memoir, Ms. Hedren writes about the people in her life from a woman named Ella Jane Knott who told her she should model, to a story of famous director Alfred Hitchcock, who wanted to sign her to his studio after seeing her in a commercial. The actress agrees that it was being in the right place at the right time and seizing opportunity that has led to her having an amazing life:

“It sort of seems that way doesn’t it? Yeah. I think, I don’t know, maybe I was just one of those people who was in the right place at the right time and or that I was smart enough to take advantage of opportunities. Maybe it was a little of both, a little bit of everything.”

Ms. Hedren is also the mother of actress Melanie Griffith. Speaking about her daughter’s life, she said this:

“Well, I feel that she has just has had an amazing career and I think she is an extraordinary actress and I supported her with everything that she wanted to do. I didn’t push her into anything. I didn’t promote her in any, you know, any way. These were all things that happened to her as my career happened to me.”

Tippi has many things to say about Alfred Hitchcock in her new book Tippi: A Memoir. Regarding how the famous director saw himself, she says this:

“I think in his mind he looked like Cary Grant, you know. Oh yes, I think he did. Yes. It was rather sad actually.”

Today, Tippi lives at Shambala in California. It is a place that houses 30 wild animals including lions and tigers. Folks can find more information about it at www.shambala.org. Reflecting on her life among the animals at Shambala, Ms. Hedren says this:

“I hear them roaring during the night and it’s beautiful. It’s just beautiful. I am the luckiest lady in the world.”

Speaking about her life and why people should read her book Tippi: A Memoir, the Hollywood legend says this:

You can find more information about Shambala and make a donation to the animal organization at www.shambala.org

You can purchase a copy of Tippi Hedren’s book Tippi: A Memoir clicking here

The photo of Tippi Hedren is credited to Bill Dow.