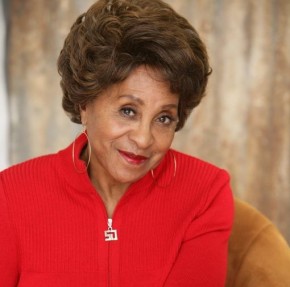 At 81 years of age, actress Marla Gibbs shows no signs of slowing down. She has a career that has included television, movies and live performances. Best known as Florence Johnston on The Jeffersons and Mary Jenkins on 227, the popular performer speaks about her life’s journey and shares some great stories about the historic shows she’s been part of.

With the passing of her friend and costar Sherman Hemsley – known to millions as George Jefferson – earlier this year, Marla is one of the last surviving members of the cast of The Jeffersons. To the end of his life, Sherman and Marla discussed possible projects they could work on together. The Jeffersons served as family for Ms. Gibbs. That sense of family continued into 227, which she produced. As Ms. Gibbs talks about those shows and her television run spanning 15 years, as Florence and Mary, you’d think you were living it with her.

You can read the highlights below, as well as listen to the entire 25 plus minute CYInterview, as Marla Gibbs reflects back on her career, TV history and life experiences that can be learned from:

This Saturday night, October 6th, Marla will be part of a one night live performance that includes a long list of great actors, musicians and dancers. The event is called Storytales which will feature performances of author John Edgar Wideman’s work and is directed by Cedering Fox. The show is at the Ford Amphitheatre in Hollywood, California. She talks about what to expect from her performance:

“My performance is called The Witness and it’s about a lady who’s sitting on her balcony watching another terrible event that happens too often in her neighborhood and I’m so excited to be doing this production with so many actors that I admire.”

When it comes to her decade long run as Florence Johnston on The Jeffersons, Marla says the show was all about love. She recalls a story from when she was in Italy, explaining how the character of Florence is known by people worldwide:

“I want them to take away the fact that this show really was based on love and we really did reflect experiences of the public. So when they look at it they could see themselves and we crossed all barriers. … I went to Sardinia, Italy and when I stepped into the station people started running towards me saying, ‘Florence, Florence.’ And I said, ‘Oh my goodness.’ I didn’t know whether I was in danger or whether it was wonderful. As they got to me and I realized they were saying Florence. It was very exciting and very gratifying because you don’t, especially when you’re not doing the show anymore you don’t think that people, you forget rather that people know you all around the world. So when you step into another medium it is just so exciting and so gratifying to get the love from these people and they all say we love you. I just received so much love as Florence.”

Her famous exchanges – filled with her wisecracks and insults – with George Jefferson played by Sherman Hemsley, make for some great examples of television comedy. Marla explains how she and Sherman worked so well together, on those memorable exchanges:

“As I said to Sherman, ‘When your lips stop moving, I’ll start talking.’ Sometimes he would think he forgot the lines and I would remind him that his mind took a picture of them the first time he saw them and we’ve done rehearsal. I said, ‘ So they’re in there so stop saying you forgot them. Then they’ll come out.’ I said, ‘Just say something that makes sense and I’ll respond to you.’ Sherman was so great at setting me up that we could make something out of nothing. … You know you can’t hit a person unless they set you up and he was so good at setting me up. Sherman was so wonderful at setting me up and, of course, I set him up too ‘cause he’d come through with some classic retorts to me.”

When discussing the passing of Sherman Hemsley earlier this year, Marla says she spoke with Mr. Hemsley a few months prior to his death. They were always talking about working on new projects. She cannot believe that most of the cast of The Jeffersons has passed on:

“It was about four months before he [Sherman Hemsley] made his transition. We kept up with each other by phone. I called him every few months so and we’d talk and we talked about trying to do another TV show, come up with an idea for one. We never really did. … I sure miss Sherman every time, but of course one thing about TV, you live on forever ‘cause I can look and see Roxie and Franklin and Sherman and Isabel. I can look at the TV and see all of them just as though they were still here. … Because I know that we never die, our spirits just transcends our body; I talk to them sometimes. I’ll think of Roxie and I’ll just talk to her when I’m driving.”

Focusing on Isabel Sanford, who played the historic role of Louise “Weezy” Jefferson, Marla says Isabel was the queen of The Jeffersons. She recalls a prank that the entire cast played on Ms. Sanford who passed away in 2004. She says the cast was always trying to play tricks on one another:

“We were always doing things to each other and the director would be in on it sometimes. Isabel would fall asleep while we were doing notes or something in rehearsal and the director would say, put his fingers to his lips and say, ‘Shoot. Quiet.’ And then we would all tip out of the rehearsal hall and then call the rehearsal hall. The phone would ring and we would wake her up and everybody would be gone. So we’d do all kinds of things like that.”

At the end of The Jeffersons, it would only be a short time until Ms. Gibbs would be producing and starring in the lead role of Mary Jenkins on the television show 227. Once again, she brought her wit and timing to a role that garnered tons of laughs. But unlike Florence Johnston, who never had a male love interest, Ms. Gibbs says she fought to have a man for Mary Jenkins on 227. That man was played by actor Hal Williams:

“She was a transition from Florence to Mary. People would always say to me, ‘Why don’t they let you have a man? Why can’t Florence have a man?’ So I knew when I did 227 I needed to have a man. So I did and I fought for that and I got it. And because Hal Williams had done the play with me for six months I said, ‘We already have a relationship. We already have a chemistry. So all we have to worry about is making alive, bring the lines to life.’ So they came to me and said, ‘We glad you fought for this because we like it. We like it too.’ So I said, ‘Good.’”

With a show business career spanning multiple decades, you might think Marla has accomplished more in her life than even she could have imagined. But as life goes on, she says what you think you want and what you really want change. She always wanted to be a singer, but she ended up as an actress. She provides some interesting advice and reflection:

I always thought I wanted to sing, which I did do a little of, but because when you’re singing, you’re asking people to take you. I was such a shy person that I was never able to divorce myself from my feelings and singing as I could in acting because I’m not asking you to like me, I’m asking you to like the character. The character has nothing to do with me in my head. Actually, it’s always some facet of you.”

Though the entertainment industry and television have substantially changed since she entered the business, Marla has learned to adapt and accept where the industry is today:

“Everything must change and you do what you can with the changes that are made. You can’t stop it. You can’t fight it. Everybody tries to go back to yesterday, but you can’t go back to yesterday. The only time there is, is now. So you have to stay in the now and you have to not judge so I don’t judge it. Somebody’s dream is coming true and I applaud them. My dreams came true and they applauded me. So things have changed. They cannot be the way they were.”

On what Marla wants people to take away from her life’s work and who she is, she offered this:

“I hope that they liked it, they believed it and that it was a form of love for them. As they keep telling me, they love Florence and so that makes me happy. I think they’re taking the right thing away from it. … That I’m the same as they. That I love and forgive and forgiving is just as important as loving and not judging, that I’m a person who does not judge. That means gossiping is off limits, unless it’s good gossip.”

You can find more information about Marla Gibbs and the rest of the cast for the Storytales event presented by WordTheatre taking place October 6th, 2012 in Hollywood, California at the Ford Amphitheatre clicking here. You can also call 323 461-3673 for more information and to purchase tickets.

4 Replies to “Actress Marla Gibbs, The Jefferson’s Feisty Maid, Florence Johnston Discusses: Her Role on the Famed Show; Her Friendship with Sherman Hemsely (George Jefferson) and His Recent Passing; Isabel Sanford (Louise “Weezy” Jefferson); 227; A Singing Career that wasn’t to be; Her Upcoming Performance in Storytales; More”